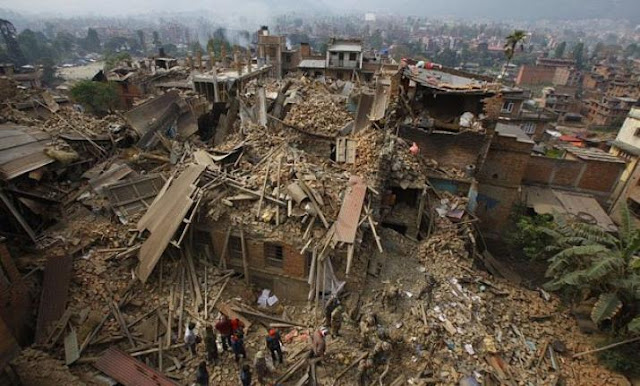 San Francisco has been hit by a big earthquake at least once every hundred years going back as far as we know. So the people of San Francisco know that sometime in the next 100 years, they are likely to get shaken again by a big quake. But we can’t say exactly when the quake might hit. Right now, all we can do is construct shake-proof buildings and put out seismic sensors. That way, when an earthquake sends out underground waves, which travel from its epicentre eight times faster than the destructive surface waves, we can detect the underground waves with enough time to give a warning like: “Uh oh! An earthquake is about to hit us!”… which is, surprisingly, enough time to turn off gas pipelines and stop trains and find cover.

But it doesn’t help people get out of town. For people to evacuate safely from natural disasters, it’s not helpful to give a really short warning or a really big window within which a disaster might happen. According to disaster experts, 2 days is just right. But if we want to be able to predict earthquakes with that amount of precision, we need to understand a LOT more about how they work.

We have tried looking backwards at quakes that have already happened and identifying events that occurred in the days before they hit, like multiple mini-quakes, big releases in radon gas, changes in magnetism, and even weird animal behaviour, to see if any of these were predictors of an impending quake. But lots of times these things happen without accompanying earthquakes and lots of times earthquakes happen without these things, so, so far we have not been able to find any reliable predictors.

Another approach is to build an accurate model of the earth beneath our feet. We know that over time, as tectonic plates rub against each other, the stress that builds up is sometimes violently released as an earthquake. If we had a really good model and reliable measurements of the forces on the plates, maybe then we could predict when and where an earthquake was going to happen. But plates are often more than 15-miles thick. That’s twice as deep as humans have ever dug so it would be pretty difficult to get monitoring equipment deep enough. So, we are creating mini-faults in the lab, to better understand the forces on moving plates, and to help identify reliable ways to measure the forces from the surface of the earth.

But in order to test our models, we need to be able to compare them to actual gigantic earthquakes, which, as we mentioned, do not happen that often. Luckily for researchers, a few ocean faults are more productive and frequently cause large but relatively harmless quakes, giving us a regular way to calibrate and fine-tune our models.

One big thing they have helped us learn is that the interactions between fault segments are really important: for example, when this particular segment slips, it increases the chances its neighbour will slip, letting us predict where the next quake will happen. In some faults, we can even say that it will happen within a couple of years. Compared to a hundred-year window, that’s really precise, but there are still two big problems.

First, these ocean faults are relatively simple, so we still have to figure out how to apply what we have learned from them to more complicated faults, like the ones near San Francisco. And second, even if we could do that, we would still be a long way away from the ideal two-day notice. And unfortunately, our existing methods probably are not going to help us get there. What we need is an earth-shattering breakthrough.

Thanks to Matt Wei, a professor in URI’s Graduate School of Oceanography. Dr. Wei uses seismic data and simulations to study the physics of plate tectonics and earthquakes. His research on fast-spreading oceanic transform faults – like the Discovery fault in the East Pacific – has helped us start to understand the importance of earthquake cycles as we work to crack the code of earthquake physics.

Also Read:-Are we Ready To predict another Carrington like event Accurately?