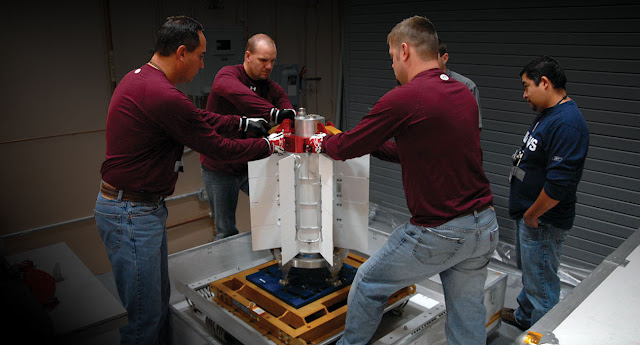 Power is the one thing a spacecraft can’t work without. Without the technology to reliably power, no long term space missions would be possible, thus our knowledge of the solar system would be only a fraction of what it is today. It might sound surprising, but there are currently only two practical options for providing a long-term source of electrical power for exploring space: the light of the sun or heat from a nuclear source such as a radioisotope.
Solar power is an excellent way to generate electricity for most Earth-orbiting spacecraft and for certain missions to the moon and places beyond that offer sufficient sunlight and natural heat. However, many potential Space missions given a high priority by the scientific community would visit some of the harshest, darkest,  and coldest locations in the solar system and these missions could be impossible or extremely limited without the use of nuclear power.
Radioisotope power systems (RPS) are a type of nuclear energy technology that uses heat to produce electric power for operating spacecraft systems and science instruments. That heat is produced by the natural radioactive decay of plutonium-238.
Choosing between solar and nuclear power for a space mission has everything to do with where a spacecraft needs to operate and what the mission must accomplish when it gets there. Radioisotope power is used only when it will enable or significantly enhance the ability of a mission to meet its science goals.
Radioisotope power systems (RPS) offer several important benefits. They are compact, rugged and provide reliable power in harsh environments where solar arrays are not practical. For example, Saturn is about ten times farther from the sun than Earth, and the available sunlight there is only one hundredth, or 1%, of what we receive at Earth. At Pluto, the available sunlight is only six hundredths of a percent of the amount available at Earth. The ability to utilize radioisotope power is important for missions to these and other incredibly distant destinations, as the size of solar arrays required at such distances is impractically large with current technology.
Radioisotope power systems (RPS) offer the key advantage of operating continuously over long-duration space missions, largely independent of changes in sunlight, temperature, charged particle radiation, or surface conditions like thick clouds or dust.
In addition, some of the excess heat produced by some radioisotope power systems can be used to enable spacecraft instruments and on-board systems to continue to operate effectively in extremely cold environments.
The latest RPS to be qualified for flight, called the Multi-Mission Radioisotope Thermoelectric Generator, provides both power and heat for the Mars Science Laboratory rover.
In 2011 the National Academy of Sciences completed a major study of the priorities for the next decade of U.S. exploration of the solar system, and several of the highest-ranked missions may require the use of an RPS.
As part of an ongoing partnership between NASA and the Department of Energy (DOE), NASA is conducting a mission-driven RPS program—a technology development effort that is strategically investing in nuclear power technologies that would maintain NASA’s current space science capabilities and enable future space exploration missions.
NASA works in partnership with DOE to maintain the capability to produce the Multi-Mission Radioisotope Thermoelectric Generator (or MMRTG) and to develop higher-efficiency energy conversion technologies, such as more efficient thermoelectric converters as well as Stirling converter technology.
In the future, radioisotope power systems could continue to support missions to some of the most extreme environments in the solar system, probing the secrets of Jupiter’s ocean moon Europa, floating in the liquid lakes of Saturn’s moon Titan or touring the rings and moons of the ice giant planet Uranus. With this vital technological capability, the possibilities for exploration and discovery are limited only by our imaginations.
Also Read:- Space Garden