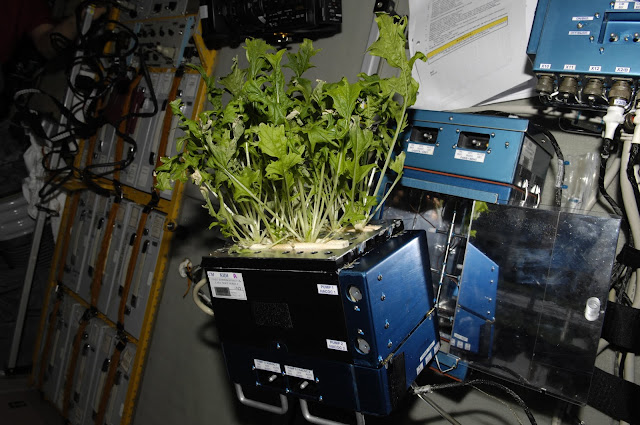 Lettuce, peas and radishes are just a few vegetables that are found in a summer garden. But did you know these same vegetables also can be grown in space? Crew members aboard the International Space Station have been growing such plants and vegetables for years in their “space garden.”
A space station study is helping investigators develop procedures and methods that allow astronauts to grow and safely eat space-grown vegetables. The experiment also is investigating another benefit of growing plants in space: the non-nutritional value of providing comfort and relaxation to the crew.
“Growing food to supplement and minimize the food that must be carried to space will be increasingly important on long-duration missions,” said Shane Topham, an engineer with Space Dynamics Laboratory at Utah State University in Logan. “We also are learning about the psychological benefits of growing plants in space — something that will become more important as crews travel farther from Earth.”
The experiment, known as Lada Validating Vegetable Production Unit — Plants, Protocols, Procedures and Requirements — uses a very simple chamber similar to a greenhouse. Water and light levels are controlled automatically.
The experiment has four major objectives: (1)To find out if the produce grown in space can be consumed safely. (2)What types of microorganisms might grow on the plants and what can be done to reduce the threat of microorganisms in the hardware prior to launch? (3) What can be done to clean or sanitize the produce after it has been harvested? (4) How to optimize production compared to the resources required to grow it?
Since 2002, the Lada greenhouse has been used to perform almost continuous plant growth experiments on the station. Fifteen modules containing root media or root modules have been launched to the station and 20 separate plant growth experiments have been performed.
The “crop” — a type of Japanese lettuce called Mizuna — returned to Earth. It was the first time two chamber experiments were conducted simultaneously for a side-by-side comparison of plants grown using different fertilizers and treatments.
“The idea was to validate in space the results of ground tests, to show that minimizing water usage and salt accumulations would produce healthier plants in space,” said Topham. “For years we have used the same method for packing root modules, so this was a comparison study between old and potential improvements and so far we have found a couple of surprising results.”
First, a sensor failure in the traditional root module on the station caused the plants to receive higher than specified water levels. Investigators believed the overwatering would disrupt nutrients and oxygen in the traditional module, making the newer improved module look better in the comparison.
Surprises in microgravity research are not unusual, though, and it turned out that overwatered traditional module sprouted and developed leaves about twice as fast. “This suggests the conservative water level we have been using for all our previous experiments may be below optimal for plant growth in microgravity,” said Topham.
The second surprising result was discovered when the root modules were unpacked on the ground. The new fertilizer being tested had a slower and more even release rate, which had helped lower the plants’ accumulation of salts during ground studies. Investigators expected to see higher salt accumulation in the space modules, but the opposite occurred.
“The current theory is that the extra water and larger plant uptake of fertilizer caused the root modules to remove nutrients faster and release fertilizer faster, thus preventing the salt accumulations that were observed in the slower-growing ground studies,” said Topham.
“The space station’s ability to provide on-the-spot adjustments to experimental conditions or opportunities to quickly repeat microgravity experiments with new conditions are a big plus for researchers,” said Julie Robinson, International Space Station program scientist at Johnson Space Center. “This work also shows the surprising results that investigators find when they take a well-understood experiment on Earth and reproduce it on the space station.”
Data from this investigation also will help advance Earth-based greenhouses and controlled-environment agricultural systems and help farmers produce better, healthier crops in small spaces using the optimum amount of water and nutrients.
The experiment takes advantage of a 20-year-old cooperative agreement between the Space Dynamics Laboratory and the Institute for Biomedical Problems in Moscow, Russia. Each organization benefits from resources provided by their respective national space programs — the Space Dynamics Laboratory with NASA, and the Institute for Biomedical Problems with the Russian Federal Space Agency.
Root modules with seeds are launched to the space station on Russian Progress supply vehicles. Russian crew members water the plant seeds and perform maintenance. They also harvest the vegetables and place them in a station freezer before transferring them to a space shuttle freezer for there safe return to Earth for analysis by investigators at the Space Dynamics Laboratory.