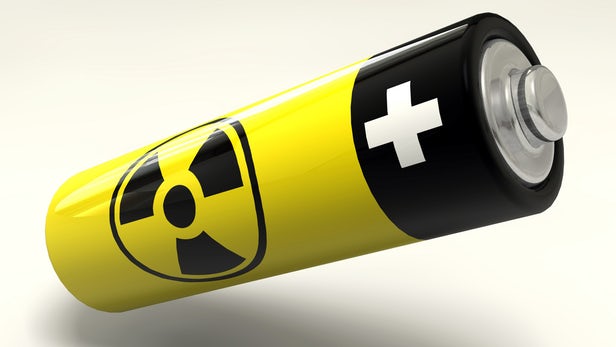 Batteries are necessities of modern life, powering everything from cell phones to vehicles. Most batteries operate via chemical reactions that convert stored chemical energy into electrical energy. These electrochemical reactions are triggered when a load (e.g. a light bulb) is connected to a battery, causing electrons to flow.
Though traditional batteries are ubiquitous and can be very cheap, future batteries may harness the power of radioactive isotopes for electricity generation. Batteries that use the decay products of radioactive isotopes are known as atomic batteries or radioisotope generators. 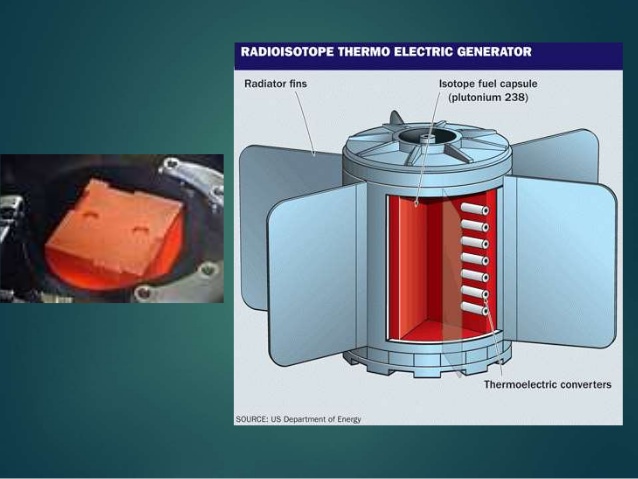 The first atomic battery was developed in 1913 by Henry Moseley. His battery consisted of a spherical glass globe with a silver lining the interior. Within the glass, the sphere was an emitter of a radioactive isotope of radium. The emitted charged particles deposited on the silver, causing a build-up of charge. This effectively created a radioactively powered capacitor, from which electric current could be extracted.
The overwhelming advantage of atomic batteries is their long life capabilities with minimal external maintenance. Therefore, radioisotope generators are ideal for space missions lasting several years or for power generation in remote locations. Furthermore, atomic batteries are lightweight, independent of sunlight unlike solar cells and unaffected by radiation belts in space (e.g. the Van Allen belts). Nonetheless, atomic batteries have only proliferated slowly primarily due to their prohibitive cost compared to traditional batteries and public health concerns regarding radioactivity.
Just as electrochemical batteries can be fueled by reactions between various chemicals, atomic batteries can be fueled by the emissions of many radioactive isotopes. However, the electric conversion principles employed distinguish atomic batteries into two categories: thermal and non-thermal. Power output from a thermal atomic battery is dependent on temperature whereas a non-thermal battery is independent of temperature.
NASA and the Department of Energy have extensively studied radioisotope power systems to produce heat and electricity for space missions lasting over a decade and extending into regions of the solar system where sunlight is too faint to permit solar energy conversion as a viable power source. As of 2005, the United States had launched 44 radioisotope thermoelectric generators (RTGs) on 25 different missions, including the Cassini mission to Saturn and the Galileo mission to Jupiter.
The radioisotope of primary interest to NASA is plutonium-238 (Pu238), a radioisotope not used for nuclear weapons. Plutonium decay products not only serve to generate electricity to power the spacecraft, but the heat generated by radioactive decay fuel radioisotope heater units which warm the instruments aboard the spacecraft. Keeping electronics and instruments warm is essential in the frigid climate of space since most electronic equipment has a relatively narrow operating temperature range.
NASA and the DOE continue to fund research on RTGs with goals to increase power conversion efficiency above 35% while maintaining the reliability of electricity generation in space. More than ten government contracts have been awarded to private companies relating to various aspects of RTGs in an effort to produce more cost-effective long-term science missions for NASA.
A non-thermal atomic battery that generates electricity from electron/beta-particle emission is known as a betavoltaic. A viable radioisotope for use in betavoltaics is an isotope of hydrogen with two additional protons, known as tritium. Since tritium loses half its radioactive energy in 12.3 years (its half-life) betavoltaics made with tritium can last well over a decade.
Furthermore, beta particles emitted from tritium do not penetrate human skin, alleviating potential public health concerns. These two characteristics of tritium make it well-suited for medical devices. For example, pacemaker recipients often outlive the pacemaker battery, requiring risky, invasive replacement surgery. Pacemakers using a tritium power source could have battery lifetimes on the order of decades, obviating the need for replacement surgery.
Another advantage of tritium is that can be easily obtained from Canadian nuclear reactors that generate heavy water as a by-product. Though betavoltaics is still more expensive than other traditional batteries, they could provide a future power source for electronics requiring minimal power in poorly accessible locations.
Also Read:- What Is Radioisotope Power System?