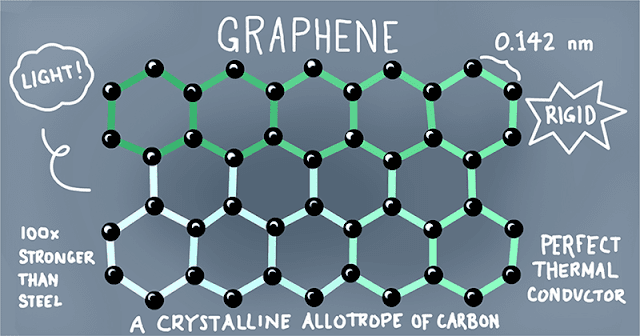 Graphene is a two-dimensional atomic-scale material, that is made of a single layer of carbon atoms that have a high level of cohesion through hybridisation bonds sp2 and arranged in a uniform surface, slightly undulating, with a similar appearance to a honeycomb lattice because of its hexagonal configuration. Graphene is an allotropic form of carbon, like graphite or diamond. Thus, one millimetre of graphite contains three million layers of graphene.
It is the strongest material known in nature, stronger than structural steel with the same density and even harder than diamond, and at the same time, it has a thickness that varies between 1 and 10 carbon atoms. Because of its thinness, this material is considered two-dimensional; it is the only material that can remain stable at just one atom thick.
It is elastic and flexible, graphene also has great electrical and thermal conductivity. This allows for heat dissipation and withstanding intense electrical currents without heating. It is virtually transparent, waterproof and so dense that not even helium can pass through it. It also exhibits many other qualities, such as high electron mobility, a property that will make it particularly interesting in the future for its potential use in fast nanodevices.
Graphene has incredible mechanical, electronic, chemical, magnetic and optical properties, and for this reason, it is one of the most investigated materials at the moment. Furthermore, graphene is pure carbon, abundantly available in nature and ecologically friendly.
For all these reasons, graphene is very promising for thousands of applications in very different fields. It has the potential to replace fundamental materials such as silicon during the next decade. The array of possibilities for its applications is so wide and so varied that it has the potential to lead to a technological revolution.
It was discovered by Konstantin Novoselov and Andre Geim in 2004, both winners of the Nobel Prize in Physics in 2010.