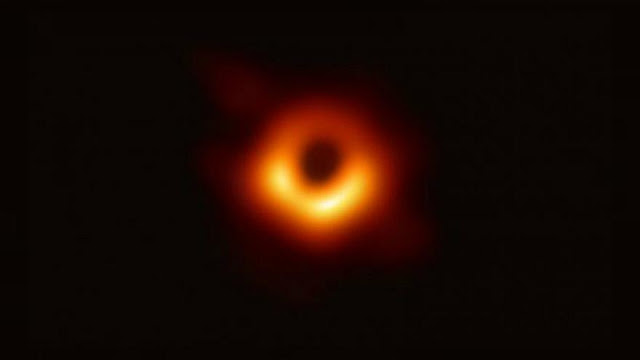 An utterly, wonderous achievement. Astronomers using the Event Horizon Telescope have taken the first ever photograph of a black hole.
Here’s the story, about a hundred years ago, Albert Einstein gave us a new description of the force of gravity in which gravity exerts its influence through warps and curves in the fabric of space and time.
Just a couple of years later, Karl Schwarzschild, he was a German astronomer who was stationed on the Russian front during World War I in charge of calculating artillery trajectories, he somehow gets ahold of Einstein’s manuscript and realizes something amazing. If you take a spherical object and squeeze it down to sufficiently small size, according to Einstein’s math, the gravitational pull will be so enormous that nothing will be able to escape. Not even light, and that is what we mean by a black hole.
Now, when Einstein caught wind of these results, he didn’t believe it. He didn’t think these objects would actually be out there in the universe and yet in the ensuing decades, theoretical developments began to mount showing that black holes were the inevitable outcome of massive stars that had used up their nuclear fuel, undergone a supernova explosion and the resulting core would have no ability to withstand the pull of gravity when it collapsed down into a black hole.
The observational cases also began to mount studies of the centre of our Milky Way galaxy showed stars whipping around the centre at such an enormous speed that the only explanation for the object that could exert the powerful gravity responsible for that motion would be a very massive black hole, perhaps four million times the mass of the sun. And perhaps the most compelling convincing observational evidence to date actually comes from gravitational waves.
When we received the first ripples in the fabric of space back in 2015, the only explanation for the pattern of those waves were two black holes, very distant, that collided, setting off a tidal wave in space that we were able to detect. Now, even with the mounting theoretical and observational evidence, we never directly seen a black hole itself. And that is what now has changed.
Using eight radio telescopes from around the world, the Event Horizon Telescope, the name of this consortium, has now taken the first ever snapshot of a black hole itself.
The image provides the first direct test of Einstein’s theory and the strong gravitational field of a black hole, and as far as we can tell Einstein was once again comes through with flying colours.
In many ways, this image really is an emblem of the power of the human intellect to explore, to discover, and understand the cosmos.