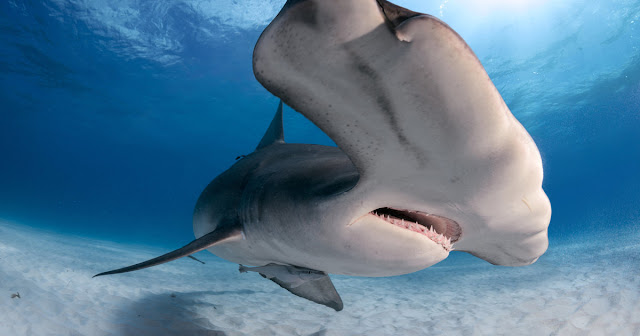 It seems like every time scientists learn something about sharks like, a new genome is published everyone suddenly starts going on about whether this new bit of information will finally show us how sharks will cure cancer. There is no doubt about it that sharks are awesome. And they can do some pretty incredible things. But wiping human cancers off the face of the Earth is not ever going to be one of them.

Sharks are not invincible. They still get old. They get sick. And just like the rest of us, they can get cancer. There is no magic cure hidden in their genes— just like there wasn’t one in their cartilage. So let us kill this zombie of a myth once and for all.

The idea that sharks are swimming cancer cures all started in the 1970s. Back then, researchers observed that cartilage— a flexible but firm kind of connective tissue— inhibited blood vessels from developing into different kinds of tissues. Since tumours tend to need a lot of blood to survive and grow, blocking this kind of blood vessel formation could help treat cancers. And a shark’s skeleton is primarily made up of cartilage.

When researchers stuck shark cartilage near tumours, it restricted the growth of new blood vessels. Somehow, that led people to think that sharks never get cancer and ingesting shark cartilage in pill form could be used to treat cancer in humans.

This turned out to be flat-out wrong— multiple studies have proved that shark cartilage is not an effective treatment for cancer. And sharks definitely get cancer. Scientists have even found ones with tumours in their cartilage. So countless sharks around the world were slaughtered for nothing, and to make matters worse, this myth pulled desperate cancer patients away from actually helpful treatments.

Now, the myth is back once again, but this time, the secret cancer cure is supposedly hidden in their genes. This all came up in 2019 because scientists were finally able to figure out what the genome of great white shark looks like— and they found some interesting things. Like, the animals have unique adaptations in genes associated with fighting infections and aspects of wound healing like blood clotting, which could explain how they mend their tissues so quickly. And their whole genome is one-and-a-half times larger than the human genome!

A lot of that extra bulk is thanks to genetic features called LINEs. These small DNA segments are a kind of transposon, meaning they can move around on their own. And the proportion of LINEs in the white shark genome is among the highest found in vertebrates so far. That’s note because LINEs can cause genomes to become unstable, resulting in cancer.

You see, a cell only becomes cancerous after enough errors have accumulated in its DNA—errors that make it grow and divide when it shouldn’t, for example. So with all those jumping genes, you would think white sharks were super prone to developing cancer.

But they are probably not, and that’s likely thanks to remarkable DNA repair. The researchers working on the white shark genome discovered the animals also have a lot of tweaks to genes that help fix DNA damage. That suggests the sharks have evolved a very effective genome clean-up crew— though functional studies would have to be done to confirm that’s true.

Their repair mechanisms might even be good enough to make their risk of getting cancer lower than other animals’. But that doesn’t mean they can’t get cancer. Scientists don’t actually have any evidence that sharks develop tumours less often than other vertebrates. And they have caught wild great whites with cancerous tumours.

But let’s say for a moment these DNA repair mechanisms are so amazing that the animals get cancer less often than, say, humans. That still doesn’t really help us treat humans with cancer. DNA repair mechanisms aren’t things we can inject or swallow to improve our cells’ ability to fix genetic mistakes. If we wanted to take advantage of them, we would have to do something drastic like add them to our DNA. And I think we all have learned from King Shark’s supervillainous ways that engineering human-shark hybrids is a bad idea.

Also, that would only maybe prevent cancer. Great DNA repair can help keep a cell from developing cancer-causing mutations. But once a cell is passed that tipping point, it’s not able to undo them. In fact, making DNA repair better once you have a tumour actually makes matters worse.

That’s because health professionals often use treatments like radiation therapy to damage the genetic material of cancerous cells, effectively killing them, and stopping their growth. But if repair mechanisms in those cancerous cells work too well, they might fix the damage, allowing the tumour to bounce back.

So oncologists are actively looking for ways to block DNA repair. There are molecules, called DNA repair inhibitors, that gum up these processes. And in theory, if you treat a patient with one of those, then traditional measures like chemotherapy or radiation therapy will inflict enough damage to kill the cancerous cells.

The hard part is finding something that can slow or stop DNA repair in tumour cells without causing too much harm to healthy cells, because, you know, you don’t want to make more cancers while you are treating one. Still, there are some potential candidates already being tested. For example, a compound called mibefradil dihydrochloride can hamper DNA repair in brain tumour cells, and clinical trials of the stuff to date have been promising.

So in short: sharks are awe-inspiring creatures. They are amazing and we should learn as much as we can about them. But the cure to cancer is not locked away in their cartilage or their DNA, since, their effective repair mechanisms can’t reverse cancerous mutations.

Maybe we could learn a bit more about DNA repair by studying their unique mechanisms for it, and that, in a very tangential way, could eventually lead to new drugs that help shut it down when we need to. But that even is kind of a stretch. And all this focus on how they are going to cure cancer distracts from the important stuff we can learn by studying them.

Digging deeper into those novel infection-fighting mutations could lead to new kinds of antibiotics that help us stay one step ahead of resistant microbes, for example. Or, understanding how sharks repair their flesh so quickly could lead to topical treatments that help seal up surgical wounds faster or reduce scarring.

Ultimately, most of what we learn from sequencing shark genome isn’t directly related to human health. Comparing their genes to ours and other animals can provide new insights into how these animals evolved and how evolution works in general.

So sharks can help us answer bigger questions about life on this planet and how we all got here. And that makes them worth studying, even though they probably aren’t going to cure cancer.