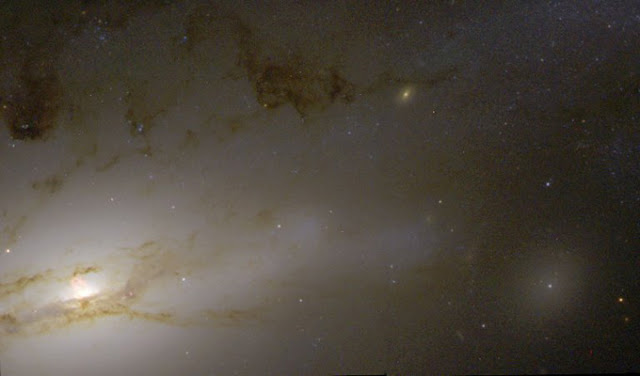 Even though nobody else will be around to see it, scientists are fascinated by the end of the universe. It is kind of like the Big Bang there’s just something so interesting about knowing where your atoms came from and where they are ultimately going to go in billions of years. Right now, there are a few ideas about how everything could end, where everything is spread so thin that activity basically stops.

Except, based on the results from a paper published in Nature Astronomy, that might not actually be true. Instead, there is a chance that everything in existence will eventually be ripped apart. And it would all be thanks to dark energy. Scientists think it makes up about 70% of the stuff in the universe and that it is the reason the expansion of the universe is accelerating. But there is a lot they are still figuring out.
Some of their research into dark energy has involved tools called standard candles. Standard candles are objects or events of known brightness that are used to measure distance in the far-off universe. Essentially, if you know how bright something should be up close, then how bright it actually looks indicates how far away it is.

For decades, the most important standard candle has been a special kind of exploding star called a type a supernova. These events always have the same brightness and in the 1990s, they allowed scientists to discover that the universe’s rate of expansion was accelerating. But what is really important for this recent study is that all the estimates provided by type 1a supernovas also indicate that the density of dark energy is fixed.

There is a lot of math involved, but this fact is a big reason they believe the Big Freeze is most likely. The problem is, you can only see so far with any given candle before it gets too dim and type 1a can’t take us back to the beginning of the universe. Because light can only move so fast, looking deep into space is like looking back in time. And these supernovas only allow us to see what things were like 4.5 billion years or so after the Big Bang.

Admittedly, there are some data sources like one called the Cosmic Microwave Background, that can tell us what things were like around 400 thousand years after the Big Bang. But that Background actually seems to disagree with what supernovas say about the expansion rate, which has had astronomers debating different options for years. There is also been a 4-billion-year gap between the two data sources, so it has been hard to figure out what’s going on.

That’s where last week’s news comes in. In their paper, a pair of astronomers proposed a new kind of standard candle, one that can let us peer back to that sweet spot just 1-2 billion years after the Big Bang. Their idea relies on quasars, rapidly-growing black holes that are among the universe’s brightest objects. Although quasars vary a lot in brightness, the authors claim that the ratio of ultraviolet brightness to X-ray brightness is not only more predictable but also reliable enough to indicate a quasar’s distance.

They point out that, at distances where both type 1a supernovas and quasars are visible, they provide comparable results, too. But the key is, farther from Earth, and further back in time, only quasars are visible. And after looking at some of those super-distant objects, the authors claim to have made a surprising observation: In the first couple billion years after the Big Bang, the growth rate of the universe didn’t match the predictions made by the supernova-based models. Back then, things seemed to be getting bigger more slowly than expected.

That implies that the amount of dark energy driving that expansion hasn’t been constant after all. Instead, it has been increasing over time. It sounds like a wild idea, but it would help explain why there isn’t a perfect match between the expansion rate we see from supernovas and that of Cosmic Microwave Background. So it is not like there is no foundation for it. But still, before they rewrite your Astronomy textbook, it is important to remember two things. One, these results will need a lot of confirmation before they are accepted into the mainstream theory. And two, scientists have effectively no clue what dark energy actually is.

So it is not even worth asking questions like what would be generating more and more of it, because we don’t even know what IT is. But if these results are true, there is one thing we do know, instead of ending in the Big Freeze, the universe would eventually end in the so-called Big Rip, where ever-increasing dark energy tears apart every particle until there’s nothing left and no one to see it. But the assumption is that it’s not such a big deal, because there is no way we would be around by then.