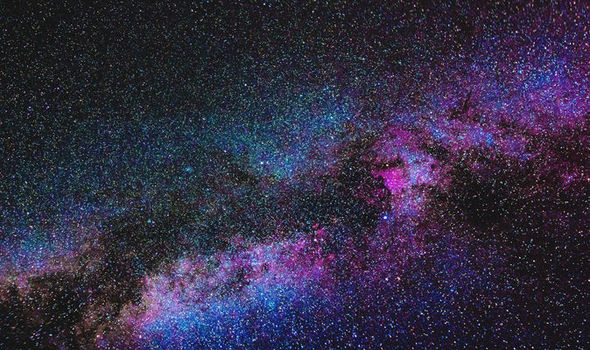 Although it might not seem obvious when you look at the night sky, but we live in a universe that is expanding faster by the instant. Every day, stars fall over the horizon of what we can see, as the space between us stretches faster than their light can reach us. And we can never know what exists past that horizon. So you might imagine or you might have heard about, a far-off future, where space is stretching faster and faster and where all of the stars and galaxies are over that edge. A future where Earth will be left with a dark, empty sky. But luckily for us, or, at least, for hypothetical future earthlings, that’s not actually the case. Because the universe is expanding but not all of it.
We have known that the universe is expanding since the 1920s, but we only discovered that the expansion is accelerating in the 1990s, thanks to the Hubble Space Telescope. Hubble was the first tool to measure really precise distances to supernovas out near the edge of the observable universe. And it showed us that out there, ancient galaxies and the supernovas in them are zooming away from us faster than anywhere else. In fact, astronomers realized that they were flying away even faster than expected. Which, at first, didn’t make sense.
At the time, we thought the universe was dominated by gravity, which pulls things together. So seeing everything accelerate apart was weird. It would kind of be like if you kicked a ball uphill and saw it speed up instead of coming back down to you. Because of this, scientists concluded that there had to be something else going on, something pushing these galaxies apart. They came to call that thing dark energy. Decades later, dark energy is still really mysterious and there is a lot we don’t understand about it.
One explanation is that it’s a property of empty space. This means that space itself, with no stuff in it at all, has dark energy. And that energy pushes space apart, creating new space, which in turn has dark energy, which pushes space apart, creating new space, which in turn has dark energy, which You get it. If dark energy is a property of space, that also means you can’t dilute it. Its density will always be the same, no matter how much space expands.
Of course, that density is also pretty small. If you borrow Einstein’s “E=mc2” trick and express energy as mass, it is equivalent to about one grain of sand in a space the size of the entire Earth. But if you average that over the whole universe, which is mostly empty space, there is more dark energy than anything else. So it dominates and the universe as a whole expands. That’s why the most ancient galaxies are also moving away faster than before.
It has taken a long time for their light to reach us, so the universe has had more time to stretch. Now, this might all make dark energy seem super strong. After all, it makes up more than two-thirds of all the stuff in the universe and it’s pushing apart entire galaxies. But it is only powerful because there is a lot of it.
Within small spaces, especially those full of planets and stars, dark energy is actually pretty weak. Like, the gravity between the Sun and the Earth or the Earth and the Moon is more than enough to overpower the repulsive dark energy between them. In fact, most of the universe’s mass is concentrated in galaxy clusters and these pockets of matter are completely immune to dark energy. They are simply not expanding.
It doesn’t mean the expansion is negligible, like how technically your gravity pulls ever-so-slightly on Earth but it is not enough to actually notice. It means that, as far as we know, dark energy is truly not stretching our galaxy at all. This is because it’s not a force like gravity, so it works a little differently.
To understand how, think about pushing on a heavy door. If you push lightly, it won’t open. Push a little harder and it still won’t. But if you push hard enough, once you cross a certain threshold of pushing, it will open. That door is gravity and within a galaxy, there’s just not enough dark energy to push it open.
In other words, gravity is too strong. So our galaxy will never expand, because if it can’t stretch even a little, then it can’t create more space. And that means the amount of dark energy inside will never grow. Of course, this isn’t something we have been able to directly observe, like by looking at other galaxies. But multiple observations have shown us what dark energy is like and they all suggest this should be true.
Eventually, in the really distant future, fewer and fewer galaxies will be visible from Earth. And in 100 billion years or so deep space will be almost empty. But if Earth were still around by then, which, admittedly, is pretty unlikely, we would still have a beautiful night sky. Even as the universe stretches, the glow of our galaxy will still be overhead and we will have stars, constellations and even a handful of galaxies bound by gravity to ours. All because dark energy just can’t get a foothold around here. Of course, this will only last until the heat death of the universe but that’s another story.
Also Read:- The Big Rip Due To Dark Energy