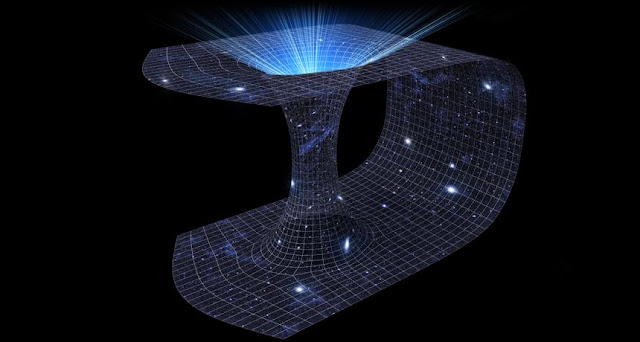 Whether it’s Star Trek, Stargate or Babylon 5 wormholes have been showing up in science fiction for a long time. They are just a super convenient tunnel to another part of the universe, a way for sci-fi writers to send their characters across huge distances in the blink of an eye. And it turns out that they are not just science fiction: wormholes could really exist. But if they do, they are much weirder than anything we could make up.
In physics, a wormhole is known as an Einstein-Rosen bridge. It is named after Albert Einstein and another physicist, Nathan Rosen. They came up with the idea together in 1935 and showed that according to the general theory of relativity, wormholes are a definite possibility. A wormhole acts like a tunnel between two different points in spacetime, which is just the continuum of space and time that makes up the fabric of the universe.
According to general relativity, gravity works by bending spacetime. Planets and Stars act like a weight in the fabric of the universe, creating a curve. It can be kind of hard to picture what spacetime is, let alone what it would mean for it to bend, so physicists often talk about it by using weights on a stretched bedsheet as an analogy. Earth would be like a big bowling ball making a big dip in the sheet and when something gets too close to the planet and it’s pulled in by the gravity, it’s like it’s falling into that dip in the sheet.
But if spacetime can be curved, it can also be twisted and shaped in other ways, like by connecting two different places with a tunnel. It’s kind of like poking two holes into that bedsheet, folding it over and then stretching the fabric so that the edges of the holes can get together and you just sew them into a tunnel. That’s a wormhole in a bedsheet. But because wormholes don’t seem to violate the laws of physics does not mean that they actually exist; they are just technically possible. And unfortunately, we haven’t yet detected any and we aren’t even sure how they would form.
If wormholes do exist, one reason we might not have spotted them is that they could be hiding behind black holes. A black hole is what happens when there is so much mass squeezed into an object that it ends up with such a strong force of gravity that even light can’t escape its pull. Once you get too close to a black hole, you are toast: there is no escaping from being smashed into oblivion. In the bedsheet model, black holes and wormholes look very similar, they both have a steep falloff that seems to go on forever. Except, with a wormhole, the steep drop actually leads somewhere.
According to general relativity, wormholes could have black holes at each end, meaning that after diving into a black hole on one end, the energy that was once your body could get spewed out somewhere totally different in the universe. Of course, you would not survive that trip. All that would be left is radiation and subatomic particles. Then there are white holes, which are the opposite of black holes: They spew out matters with such force that it would be impossible to enter them. If black holes are infinite weights on a bedsheet, white holes would be like hills: objects pushing up on the bedsheet.
Like wormholes, these are a thing that could exist, the math does check out, we are just not sure how they would form. But we know that if they exist, they could be found at either end of a wormhole, too. So, maybe if there was a black hole at one end of the wormhole and a white hole at the other, we could go in the black hole end and be blasted out the white hole end, Maybe. But you would still probably be crushed by the black hole in the process. Not to mention it would definitely be a one-way trip.
There are a few other problems with wormholes. For one thing, they would probably be dangerous. Sudden unexpected collapse, weird exotic particles, a ton of radiation. In fact, travelling through a wormhole could instantly collapse it, because they would probably be unstable. And then there is the fact that wormholes might not be a shortcut at all. A random wormhole could easily be a longer-than-normal path. Size is also a problem. A real-life wormhole could be too small for us to travel through. Not to mention the travel time, which could be millions or billions of years, making some wormholes pretty useless.
So, that’s a lot of problems. The biggest hope actually comes from how little we know. A lot of this depends on physics that we haven’t quite worked out yet or on facts about our universe’s history and geometry that we just don’t know for sure. Once we have all that figured out, the final barrier would be technology and opportunity. Right now, we definitely don’t know how to make a wormhole and we would have to be super lucky to find one that is useful to us if they exist at all.
So, it’s pretty clear that we won’t be sliding through any wormholes anytime soon. But we know that they could be out there, hiding in some of the most extreme places in the universe. And who knows? Maybe our ideas about wormholes will be totally different in the future. People living just a few hundred years ago couldn’t have even imagined particle accelerators or internet. Until we find one or build one Let’s will keep exploring the universe.
Also Read:- Let’s Understand Naked Singularities