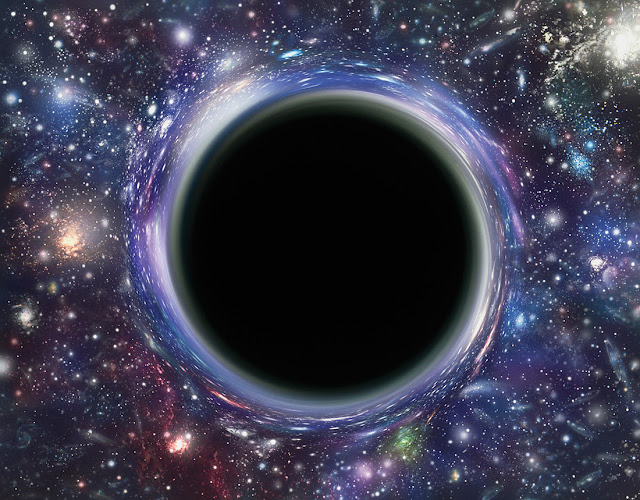 When people talk about black holes, there is one thing that pretty much always comes up is that Black holes get their name because the infinitely tiny, infinitely dense point in the centre has a gravitational pull so strong that even light can’t escape. The thing is, that might not always be true. For the past half-century — basically, as long as we have known black holes are a thing — astrophysicists have been debating the existence of something that should be a black hole, except it’s neither black nor a hole. They are called naked singularities and if they exist, they will rewrite physics as we know it.
When a star dies, it undergoes a gravitational implosion and starts to collapse in on itself. If the star is massive enough, nothing can stop the collapse and all that matter turns into a single point in space. We call that point a singularity and it has zero volume and basically infinite density. Like with basically everything involving infinity, it’s hard to even imagine what that means. But that’s astrophysics for you things get weird.
A singularity isn’t the same thing as a black hole, but it is what causes the black hole. The term “black hole” refers to everything inside the event horizon, the point where the singularity’s gravitational pull becomes so strong that light can’t escape. It is impossible to see anything inside it from the outside. And if you decided to go inside the event horizon to check out what is going on, you would never get out again. So, sure, for a moment you would be the only person in the universe to actually know what’s happening down there, but you would never be able to tell anyone and you’d be stuck until you died.
In 1965, an astrophysicist named Roger Penrose demonstrated that all black holes must have singularities within them. Makes sense, But he couldn’t prove that all singularities need to have a point-of-no-return event horizon and therefore a black hole surrounding them. In other words, he couldn’t prove that it was impossible for a singularity to be naked. He was pretty sure naked singularities couldn’t exist though, even if he couldn’t mathematically prove it. Four years later, he coined what’s known as the conjecture of cosmic censorship, which basically just says that it’s impossible for a singularity to exist without a black hole around it.
Again, he couldn’t prove it, it was just a conjecture. But it was really hard to imagine how an infinitely dense point could exist without a black hole around it and all these decades later, many astrophysicists still subscribe to cosmic censorship. But not all of them. We have obviously never observed a naked singularity, but that doesn’t mean it’s impossible for them to exist.
This long-running debate actually led to one of many wagers Stephen Hawking has publicly made about astronomical discoveries. In the early 1990s, he bet Caltech Kip Thorne and John Preskill that naked singularities can’t exist. The loser had to, quote “reward the winner with clothing to cover the winner’s nakedness,” which was definitely on-theme. Months later, Hawking actually found mathematical evidence, though, not definitive proof that when a black hole finishes evaporating, it might leave behind a naked singularity.
If the idea of a black hole evaporating sounds super strange well, it is. But it is one of the many quirks of quantum mechanics, which predicts that a pair of particles can spontaneously pop into existence with one on either side of the event horizon. If the one outside has the right trajectory, it will escape off into the universe, leaving the black hole with a teeny tiny little bit less mass. But! Quirks of quantum mechanics didn’t fall within the confines of the bet, so Hawking technically hadn’t lost.
He had to concede in 1997, though, when computer models found a special case for fine-tuned parameters that would produce a naked singularity from an imploding star. Basically, it’s like trying to balance a sharpened pencil on the pointy end Highly improbable, but not impossible. Hawking made the most of his loss, though — he gave Thorne and Preskill T-shirts featuring a woman in nothing but a towel, along with the words “Nature Abhors a Naked Singularity.”

So, simulations are able to suggest naked singularities might form if conditions are just right, but what about more general cases? Well, researchers have found that if our universe had a different number of dimensions or was shaped differently than it is, then yes — it could form naked singularities. But all this could mean that naked singularities only work on paper, not in practice.
We are kinda stuck with the universe we have got. If by chance we actually learn of a real naked singularity floating around out there in the cosmos, though, it could change our understanding of the universe. Mainly because we would be able to study something that’s governed by both quantum mechanics (the science of the very small) and general relativity (the science of the very massive).
As it stands, these two theories work almost perfectly when you are using each of them on their own, but they don’t play well together. When you try to apply them both at the same time, like when something is both super duper massive and super duper tiny — basically, a singularity — they spit out nonsense answers. But being able to directly observe a singularity would give us the data to either unite them or scrap them for a different theory entirely. A unified theory of the universe would do more than just reveal the secrets hiding in black holes.
Right now, anything that happened before 10-43rd seconds after the Big Bang is a big mystery because both quantum mechanics and general relativity would apply to it. That is such a tiny fraction of time that you might think it wouldn’t really matter anyway, but, like, those were the very first moments of our universe. In other words, for being infinitely tiny, naked singularities are a pretty big deal.
Also Read:- How Does Google Maps Works?