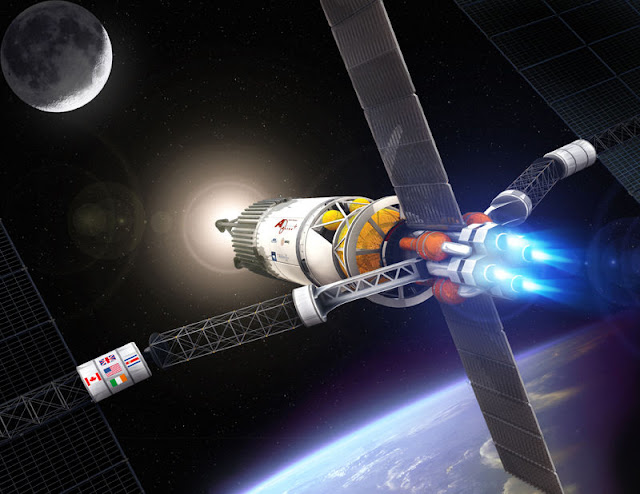 While travelling in space, one of the hardest things to do is to stop or change direction. Without anything to push against or friction to slow things down, spacecraft need to do all the hard work of changing their speed or path by there thrusters. And sometimes they do that in ways you would never expect: like by vaporizing Teflon. They are called pulsed plasma thrusters and they can use the same stuff that’s on your frying pan to make spacecraft zoom around the universe. And they have been doing it since the 1960s.

To make basically any move in space, satellites rely on Isaac Newton’s famous Third Law of Motion, which is probably on a poster in every high school physics classroom: For every action, there is an equal and opposite reaction. Put another way: throw stuff backwards and you will go forward. In fact, you can boil down every rocket design, no matter how complicated, to this basic idea. When thinking of a rocket, you might normally imagine the chemical propulsion. That’s the “fire-coming-out-the-end” kind, which uses a controlled explosion to hurl material out the back of the rocket.

But once in space, another kind, electromagnetic or EM propulsion, also becomes available. They are not strong enough to get rockets off the ground, but they are great once you are past most of Earth’s atmosphere. These rockets work kind of like railguns, accelerating charged particles or ions, out the back with electric or magnetic fields. Today, we have all kinds of EM thrusters, but pulsed plasma thrusters, or PPTs, were the first ones ever flown in space.

They were used in 1964 on the Soviet Zond 2 mission to Mars. Like some other engines, PPTs specifically use plasma to generate thrust, instead of a random collection of ions. Plasma is a super hot substance made of charged ions and it is the fourth state of matter. In some ways, it behaves kind of like gas, because its atoms are pretty spread out. But unlike the other states of matter, plasmas can be shaped and directed by electric and magnetic fields.

To generate its plasma, PPTs eat Teflon! Which is pretty awesome. A pulsed plasma thruster places a block of Polytetrafluoroethylene what we know as Teflon between a pair of metal plates. Then, connected wires charge up those plates with electricity until it arcs through the Teflon block, set off by a spark plug. That arc delivers thousands of volts into the block, vaporizing the nearby Teflon and ionizing it into a plasma. The sudden burst of plasma effectively creates a circuit connecting the metal plates, which allows electricity to flow like it is travelling through a wire.

One neat side effect of flowing electricity is that it generates a magnetic field. And everything in the thruster is already arranged so that this field pushes the plasma out into space. At this point Newton’s third law springs into action, pushing the spacecraft in the opposite direction of the departing particles.

Well, this kind of thruster produces a very tiniest bit of motion. A pulsed plasma thruster deployed by NASA in 2000 produced an amount of force equal to the weight of a single Post-it Note sitting on your hand. Which might not seem that exciting, but it has some big implications. Like other forms of electromagnetic propulsion, these engines require a lot of electricity to run, but in exchange, they offer incredible efficiency with their fuel.

Pulsed plasma thrusters can produce up to five times more impulse or change in momentum for every gram of fuel than a typical chemical rocket. They do it very, very slowly, but they get the job done. PPTs also offer exceptional simplicity and safety. The only “moving part” is a spring that constantly pushes the Teflon block forward and without the need to store pressurized liquid or gas fuel, there is no chance of explosion. So it makes sense then that pulsed plasma thrusters were so useful back in the 1960s. Since then, their lack of power has meant that most spacecraft main engines have remained chemical. And when companies really need some kind of EM drive like for the Dawn mission to the asteroid belt they will tend to choose more sophisticated designs. But that doesn’t mean we are done with these thrusters just yet.

Recently, their extreme simplicity has made them a natural fit for the most up-and-coming field of exploration: CubeSats. CubeSats are tiny, shoebox-sized satellites designed for simple missions and built on the smallest of budgets often by research labs or universities. Earth-orbiting CubeSats seem almost tailor-made for the strengths of pulsed plasma thrusters. Lots of sunlight gives them ample electric power, but since they are so small, space and weight are at an absolute minimum. And right now, most CubeSats typically don’t have any kind of propulsion system of their own.

So one solution is micro pulsed plasma thrusters, which can weigh just a few hundred grams and measure under 10 centimetres on a side. That might not sound like much, but even a tiny amount of thrust could double the useful life of some kinds of CubeSats. They will likely need to undergo more testing and development before they are ready for primetime, but someday, we could have a whole fleet of Teflon-eating satellites.