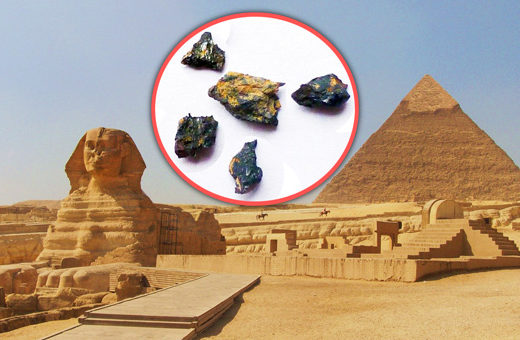 From snazzy banded agates to volcanic elephants, there are some pretty weird rocks out there. But the weirdest ones geologists find might be those that fall from space. One of them called the Hypatia stone, it might be, the strangest of them all. In fact, all signs currently suggest that this rock’s origin story is older than the solar system itself and if it is not well, we are going to have to rethink what we know about our cosmic neighbourhood.

The Hypatia stone was found in 1996 by a geologist in the southwest Egyptian Sahara. It is named after the first female astronomer and mathematician who managed to make the history books.

The stone was discovered in fragments no bigger than a centimetre across and in total, the pieces added up to a volume only about 20 cubic centimetres. Technically, it isn’t considered a meteorite, because the Meteoritical Society requires 20% of a rock’s original mass to be present to earn that title. And scientists have chipped this thing apart and sent pieces to so many labs that it no longer fits the bill.

But it’s definitely from space. When its extraterrestrial origins were confirmed in 2013, scientists assumed it was the very first comet nucleus or the rocky, central part of a comet, to be found on Earth. But its story is a bit more complicated and interesting.

First, exactly when the stone struck our planet is hard to pin down. It was found in an area of the Sahara which is full of these special rocks called Libyan Desert Glass, which are believed to have been created by a meteorite impact 28 million years ago. But the relationship between the Hypatia stone and this glass is far from certain. We are also not positive how big this rock was when it initially entered Earth’s atmosphere.

Based on its amount of a certain type of neon, we think it could not have been more than several meters in diameter. Or if it were bigger, the Hypatia stone itself had to have come from the upper few meters. These basic details are important to figure out, but what’s really strange about the Hypatia stone is what researchers discovered once they started analysing its composition. Because from what we can tell, Hypatia’s chemical makeup isn’t just out of this world.

It’s out of the entire solar system! See, everything in our neighbourhood formed out of the same cloud of dust and gas. And since astronomers believe that the cloud was relatively homogeneous, the rocky bits that formed should all have roughly the same chemical makeup.

But in 2015, scientists revealed that the Hypatia stone is different. It has a composition unlike any other solar system object studied in a lab. For example, its amount of the isotope nitrogen-15, a type of nitrogen with an extra neutron, was way off for it to be from a standard Comet.

Astronomers also found a type of xenon that’s created when one iodine isotope, one that predates the solar system, undergoes radioactive decay. So something about this thing totally isn’t normal. And in 2018, we got an even deeper analysis.

In February 2018, a team of astronomers announced that they would identify two separate, yet intermingled, matrices in the Hypatia stone, kinda like finding two different batters in the same cake. The matrices themselves had to have formed when the solar system did because Hypatia needed a cloud of dense interstellar dust to form. But they had the opposite composition of carbon and silicon that common meteorites do.

The ones we normally see, called chondritic meteorites, are low in carbon and high in silicon, but Hypatia has lots of carbon and basically no silicon. So again, not normal. But what was even more surprising about this analysis is that one of those matrices was also chock-full of deposits or inclusions. And each of them likely existed before the entire solar system! This includes moissanite grains, which are commonly a small part of some meteorites but are considered to be mostly pre-solar.

They also found a nugget of pure metallic aluminium in Hypatia, which is super rare in solar system rocks. And there were also a lot of these organic molecules called polycyclic aromatic hydrocarbons or PAHs, which are a big part of interstellar dust. PAHs are also inside certain comets and asteroids, so finding them in the Hypatia stone wasn’t unusual, but the abundance of them was. Conveniently, these PAHs were also a big reason we are able to study the stone today.

Many of them were turned into a crust of tiny diamonds, likely when Hypatia crashed into the Earth, and they protected and preserved the inside of the rock for millions of years. But that doesn’t explain where they came from. And there were other compounds found that haven’t been observed in any studied space rock, too. So the Hypatia stone is still completely unique.

At least as far as we know. Although it’s a pretty compelling case, we will still need further analysis of certain isotopes before we can definitively say that parts of this rock existed before the Sun. But the exciting news is, the authors of that 2018 paper hope to get that research out ASAP.

So, even if Hypatia turns out not to be pre-solar, that might be even weirder. That would imply that the early solar system wasn’t homogeneous after all, despite the generally accepted view. So we would have to change the way we think about our neighbourhood’s history.

Based on what we know so far, astronomers can at least tell that the stone had to have formed in a super cold environment, one below about -200°C. So if it is from around here after all, that likely means Hypatia had to have formed out in the Kuiper Belt where Pluto lives, or even farther away, like in the distant, mysterious Oort cloud.

We don’t actually know a lot about the composition of all the bodies that far out there, so it could totally turn out that there are other Hypatia-like space rocks. Mostly, all this means means we just have to keep looking. But no matter what the answer to this mystery is going to a cool one.