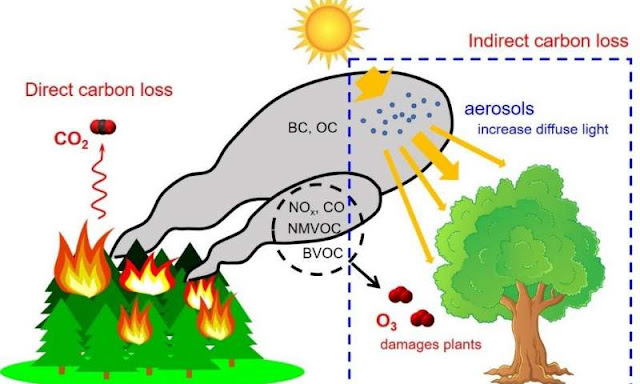 Pollutants from wild fires affect crop and vegetation growth hundreds of kilometres from impact zone, research shows The startling extent to which violent wild fires, similar to those that ravaged large swathes of California recently, affect forests and crops way beyond the boundaries of the blaze has been revealed.
A pioneering new study by Professor Nadine Unger of the University of Exeter and Professor Xu Yue of the Institute of Atmospheric Physics in Beijing, has revealed that pollutants released by the devastating wild fires can affect crop and vegetation growth hundreds of kilometres from the fire impact zone.
The study examined how ozone and aerosols—two by-product pollutants of wildfires—influences healthy plant growth in areas that are seemingly unaffected by the destructive natural disasters.
It found that there was a significant reduction in plant productivity in areas far away from the fire’s borders. The study suggests that fire pollution could pose an increasing threat to regional, and even global, productivity in the warming future world. The study was published in Nature Communications.
Professor Unger, from the University of Exeter’s Mathematics department said: “The impacts of these wildfires on public health has been widely recognized, but the impact they also have on our ecosystems is less known.
“What we have found is that the pollutants released by these fires impact plants in areas way beyond the boundaries of the disaster. Globally, over the past decade, fire ozone pollution reduced plant productivity substantially more than estimated drought losses.”
The impact of fire on the Earth’s carbon budget has been well documented. Each year, global fires directly emit large amounts of carbon directly into the atmosphere. This immediate carbon loss is partially compensated by a boost in new ecosystem productivity, driven by changes to canopy composition and soil respiration.
For the study, scientists used state-of-the-art computer models, together with a vast array of existing measurement datasets, to assess the separate and combined effects of fire pollutants from 2002-11.
It found that the Gross Primary Productivity (GPP) – essentially plant photosynthesis—was significantly reduced when the amount of surface ozone increases.
Crucially, this reduction in GPP was not confined to the areas immediately in and surrounding the fires. It found that areas downwind from the fires, hundreds of kilometres away, experienced significantly reduced plant productivity.
Crops and vegetation in sub-Saharan Africa were identified as a particularly vulnerable hot spots to fire ozone pollution damage.
The study suggests that the ecological impacts of this air pollution is far greater than previously thought—potentially impacting crop production that is crucial to the survival of rural, remote communities.
Professor Unger added: “To the extent that we are worried about fire particulate pollution affecting human respiratory health, we need to be concerned about fire ozone pollution damaging forest and agricultural productivity downwind. We are now using the UK Met Office Hadley Centre Earth System Model to predict how increasing fire activity, air pollution, and drought affect the ability of the land surface to grow food and to take up carbon dioxide in the future warmer world.”
Source:- Nature Communications
Also Read:-Competition For Mitogens Regulates Spermatogenic Stem Cell Homeostasis In An Open Niche