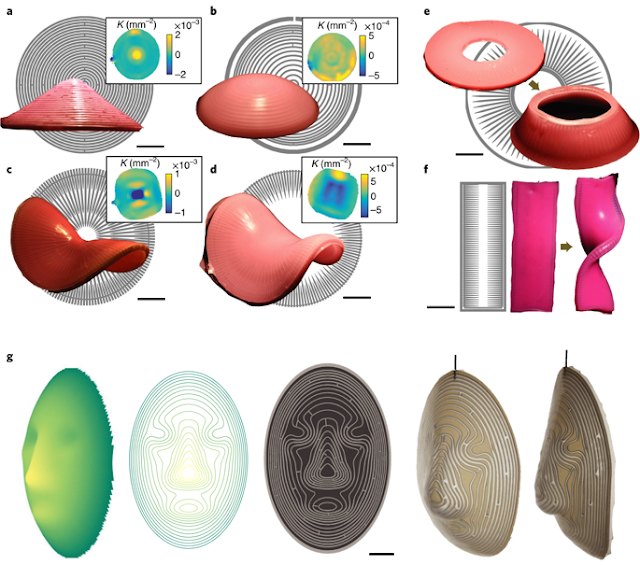 A small team of researchers at ESPCI Paris has come up with a way to combine pneumatics with a hydrogel to create a baromorph for soft robotics applications. A baromorph is a soft material that self-configures when inflated. In their paper published in the journal Nature Materials, the group describes their research and their geometric creations. Efi Efrati with the Weizmann Institute of Science has written a News and Views piece on the work done by the team in the same journal issue.
In the never-ending quest to create robots that are more capable, roboticists have often been inspired by creatures that nature has designed. Attempting to mimic humans is a popular research area, as well as copying four-legged creatures. Efrati notes that most such animals have one thing in common stiff parts of their anatomy working against other stiff parts produce motion bones in joints, for example. But as Efrati also notes, there is another area of research focused on the development of softer components that are manipulated without stiffer components like jellyfish or flowers. Unfortunately, progress in this area has been rather slow as soft machines tend to respond slowly due to actuation issues. They also tend to have limited degrees of motion and wear out quickly. In this new effort, the researchers have come up with a novel approach to creating soft machines combining the bendability of hydrogels with the power of air pressure. They call their creations biomorphs and they have demonstrated that they can be used to create soft-machines in a wide variety of shapes.
Each baromorph is essentially a sheet of hydrogel with channels inside of it. In its initial relaxed state, it is typically flat. When air is pumped in, it is routed through the channels in such a way as to inflate the baromoph into a desired shape. The channels are designed using a computer program, which also handles the formation of the resultant product. To prove the viability of their method, the researchers created baromorphs that were shaped like bowls, a saddle and even a human face.
Shape-morphing structures are at the core of future applications in aeronautics, minimally invasive surgery, tissue engineering and smart materials. However, current engineering technologies, based on inhomogeneous actuation across the thickness of slender structures, are intrinsically limited to one-directional bending.  The describe a strategy where mesostructured elastomer plates undergo fast, controllable and complex shape transformations under applied pressure. Similar to pioneering techniques based on soft hydrogel swelling these pneumatic shape-morphing elastomers, termed here as ‘baromorphs’, are inspired by the morphogenesis of biological structures. Geometric restrictions are overcome by controlling precisely the local growth rate and direction through a specific network of airways embedded inside the rubber plate. They have shown how arbitrary three-dimensional shapes can be programmed using an analytic theoretical model, propose a direct geometric solution to the inverse problem, and illustrate the versatility of the technique with a collection of configurations.