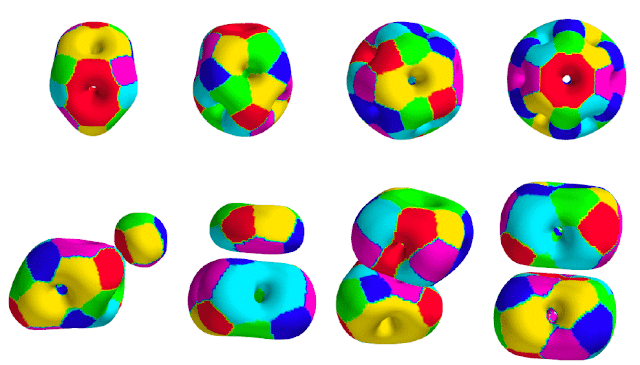 A skyrmion is a tiny disturbance in a substance, a swirling pattern that, like a knot, is difficult to undo. In the 1960s, nuclear physicist Tony Skyrme suggested that these structures since named after him could represent protons and neutrons within a nucleus in theoretical calculations. But despite some initial promise, the idea hit snags. In particular, skyrmion calculations produced misshapen nuclei.
But now researchers have improved their calculations of how protons and neutrons should cluster together in the skyrmion picture. Those results agreed with expectations based on experimental data, the team reports in a study in press at Physical Review Letters.

Here’s how the idea works: Inside a nucleus, particles called pions are constantly zinging around, helping to hold the nucleus together. Just as an electron has an electric field that can jostle other particles, those pions are associated with fields too. In Skyrme’s original picture, protons and neutrons can be described as twists in the pion field or skyrmions akin to a knot tied in a piece of string.
In reality, protons and neutrons are each made up of smaller subatomic particles called quarks and gluons, and the fundamental theory that describes how those particles interact, called quantum chromodynamics, is impossibly complex. Skyrmions could simplify calculations if only the technique produced the correct answers.

Scientists predict that some atomic nuclei should be shaped into multiple clumps. Previously, the shapes of those nuclei, when calculated with skyrmions, displayed forms that disagreed with that prediction (top row). But new skyrmion calculations found nuclei that consisted of multiple clusters, as expected (bottom row). Colours indicate the type of pion particles that help hold the nucleus together that dominates in each region.
Now, physicists from Durham University in England have solved some of the skyrmions’ woes, in studies of atomic nuclei as large as carbon-12.

Skyrmion calculations typically neglect heavier particles called rho mesons that are also important for keeping nuclei intact. Including those particles in the calculations changes how the skyrmion “knot” in the field gets tied, and the shapes of the resulting nuclei, says mathematical physicist and study coauthor Paul Sutcliffe. It’s as if the knots were tied in “a boring piece of string before, and now it’s a coloured string with some sparkles on it.” As a result, “you now get the right shapes,” he says.
The idea of skyrmions caught on in other fields as well. A related skyrmion shows up in spirals of magnetization in certain solid materials, but magnetic skyrmions are much larger and can be manipulated at will.

Researchers have long struggled to use skyrmions to study atomic nuclei, says theoretical physicist Nicholas Manton of the University of Cambridge who was not involved with the study. But the new result “gets closer to being physically reasonable.”
Eventually, such calculations might help scientists study surprising properties of certain nuclei. An example is carbon-14, a radioactive version of carbon that can be used to date ancient artefacts. It decays with a surprisingly long half-life of about 5,700 years. Skyrmions could help scientists better understand that strange decay, Manton says.

Also Read:- A New Way To Combine Pneumatics With A Hydrogel To Create A Baromorph For Soft Robotics Applications