Game theory as we know it today came about in part because of one man’s interest in poker. This man was not just your average man on the street. He was a mathematician, physicist and computer scientist named John von Neumann.

His goal was loftier than becoming a better poker player. He was only interested in poker because he saw it as a path toward developing the mathematics of life itself. He wanted a general theory – he called it ‘Game Theory’ – that could be applied to diplomacy, war, love, evolution or business strategy.

He moved closer toward that goal when he collaborated with economist Oskar Morgenstern on a book called “A Theory of Games and Economic Behavior” in 1944.

The Library of Economics and Liberty (Econlib) states that in their book, von Neumann and Morgenstern asserted that any economic situation could be defined as the outcome of a game between two or more players.

What is a game according to game theory? Yale economics professor Ben Polak notes a game has three basic components: players, strategies and payoffs. As we just mentioned, game theory applies to games involving two or more players. In a game, players share “common knowledge” of the rules, available strategies, and possible payoffs of a game. However, it is not always the case that players have “perfect” knowledge of these elements of a game.

Strategies are the actions that players take in a game. The strategy is at the heart of the game theory. The theory presented in A Theory of Games and Economic Behavior as the mathematical modelling of a strategic interaction between rational adversaries, where each side’s actions would depend on what the other side would do.

The concept of strategic interdependence – the actions of one player influencing the actions of the other players – is one important aspect of von Neumann’s version of game theory that is still relevant today.

Then there are payoffs, which one source describes as the “outcome of the strategy applied by the player.” Payoffs could be a wide range of things depending on the game. It could be profits, a peace treaty or getting a great deal on a land.

One limitation of Von Neumann’s version of game theory is that it focused on finding optimal strategies for one type of game called a zero-sum game. In a zero-sum game, one player’s loss is the other player’s gain. A source notes that players can neither increase nor decrease the available resources in zero-sum games.

Critics have noted that life is often not as simple as a zero-sum game. More complicated game scenarios are possible in the real world. For example, players can do things like find more resources or form coalitions that increase the gains of several players. Game theory has evolved to analyze a wider range of games such as combinatorial games and differential games, but we have time to look at only one.

A classic example of a game often studied in game theory is called The Prisoner’s Dilemma. There are two prisoners, Jack and Tom, who have just been captured for robbing a bank. The police don’t have enough evidence to convict them but know that they committed the crime.

They put Jack and Tom in separate inter[r]ogation rooms and lay out the consequences: If both Jack and Tom confess they will each get 10 years in prison. If one confesses and the other doesn’t, the one who confessed will go free and the other will spend 20 years in prison. If neither person confesses, they will both get 5 years for a different crime they were wanted for.

The Prisoner’s Dilemma contains the basic elements of a game. The two players are Jack and Tom. There are two strategies available to them: confess or don’t confess. The payoffs of the game range from going free to serving 5,10, or 20 years in prison. 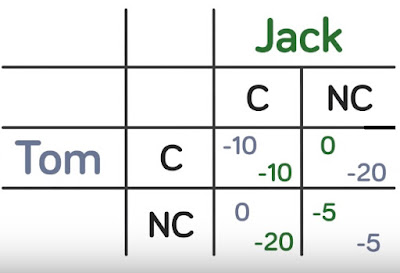 Moves are simultaneous, which means that neither player knows the other’s decision and decisions are made at the same time. In this example, both prisoners are in separate rooms and won’t be let out until they have both made their decision.

One common solution to simultaneous games is known as the “dominant strategy.”  It is defined as the “strategy that has the best payoff no matter what the other player chooses.” Tom does not know if Jack will confess or not. He takes a look at his options. If Jack confesses and Tom does not, Tom will get 20 years in prison. If both Jack and Tom confess, Tom will get only 10 years. If Jack does not confess and Tom does, Tom will go free.

The best strategy for Tom is to confess because it leads to the best payoffs regardless of Jack’s actions. Confessing will cause Tom to either go free or serve less prison time than if he did not confess. Jack is in the same situation and has the same options as Tom. As a result, the best strategy for Jack is also to confess because it leads to the same best payoffs that Tom will get.

One study states that a dominant strategy equilibrium is reached when each player chooses their own dominant strategy. Why is the strategy of both not confessing not the best choice? While this option would give both of them less prison time than if they confessed, it would work only if each of them could be sure the other one would not confess.

It is unknown whether Tom and Jack would be able to work together with that level of cooperation. In addition, both are unlikely to choose the strategy of not confessing because it has a greater penalty than they would get if they confessed. Confessing also gives each of them the possibility of serving no prison time, which is even less than 5 years in prison.

The Prisoner’s Dilemma is a good example of how rationality can be problematic in game theory. The University of British Columbia, Vancouver researcher Yamin Htun calls it “one of the most debatable issues in game theory.”

Htun points out that almost all of the theories are based on the assumption that agents are rational players who strive to maximize their utilities (payoffs).  Yet studies demonstrate that players do not always act rationally and that “the conclusions of rational analysis sometimes fail to conform to reality.

The Prisoner’s Dilemma also reflects how other game theorists were able to fix some of the problems with Von Neumann’s version of game theory. One of them was mathematician John Nash.

He found a way to determine optimal strategies in any finite game. He describes the Nash equilibrium as a particular solution to games—one marked by the fact that each player is making out the best he or she possibly can, given the strategies being employed by all of the other players.

When Nash equilibrium is reached in a game, none of the players wants to change to another strategy because doing so will lead to a worse outcome than the current strategy. In the Prisoner’s Dilemma, the Nash equilibrium is the strategy of both players confessing. There is no other better option for either player to switch to.

Nash received great praise for the Nash equilibrium and his other work in game theory – but not from John von Neumann. According to Forbes, “Von Neumann, consumed with envy, dismissed the young Nash’s result as ‘trivial’– meaning mathematically simple.”

Others did not share in Von Neumann’s assessment of Nash’s work. Nash, Reinhard Selten, and John Harsanyi went on to share the 1994 Nobel Memorial Prize in Economic Sciences for their work in game theory.

Nash’s most fundamental contribution to game theory was in opening the field up to a wider range of applications and different scenarios to be studied. Without his breakthrough, much of what followed in game theory might not have been possible.