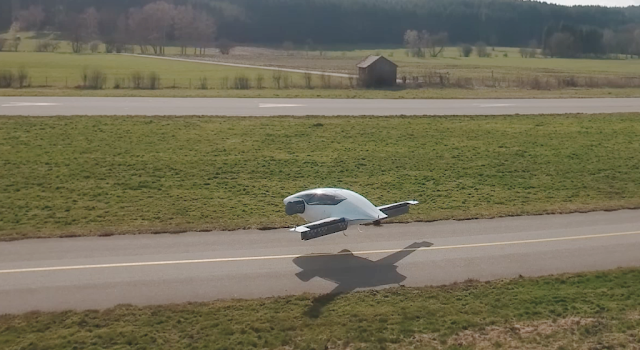 The concept of the flying car has been a staple of gee-whiz Tomorrowland-style science fiction since the 1950s. But real-world incarnations of the idea have traditionally been rather underwhelming. The all-electric Lilium Jet just attracted $90 million in funding and differs from similar projects in that it’s already flying.

Depending on how you define your terms, we already have several flying cars in the skies right now, from straightforward hybrids like the Terrafugia Transition basically a small private plane with fold-up wings to passenger drones like the recently unveiled Kitty Hawk, backed by Google’s Larry Page. These aircraft incorporate all manner of promising technologies, but they don’t look anything like the flying cars from those old pulp magazine. Except for one.
Germany’s Lilium Jet, backed in part by the European Space Agency, is a decidedly space-age looking vehicle and is probably the closest thing we have to the popular depictions of a flying car. The Lilium design expands on existing Vertical Take Off and Landing technology, which powers military aircraft like the Harrier Jump Jet. Scaled down for civilian use, the Lilium is basically a two-seat electric jet for the discerning 21st-century commuter.

In April of 2017, a full-size prototype of the Lilium, dubbed Eagle, made its maiden voyage above an airfield outside Munich. The test flight was unmanned, but the proof-of-concept demonstration was impressive enough, apparently. This week, Lilium Aviation announced that it has raised $90 million in a new round of financing.
This is the next stage in our rapid evolution from an idea to the production of a commercially successful aircraft that will revolutionize the way we travel in and around the world’s cities,” Lilium co-founder and CEO Daniel Wiegand said in a statement announcing the new financing.

The influx of cash is a huge vote of confidence for the small German company, which is going head-to-head with heavy hitters like Airbus and Uber, each of which is also aggressively developing flying car systems.
The Airbus Pop Up system, still in the concept phase, imagines a fleet of modular passenger cabins that attach to a wheeled chassis when driving and a rotor array during flight. Uber’s Elevate initiative, also still on the drawing board, proposes semi-autonomous passenger drones that can be hailed from rooftops and helipads in urban settings.

The Lilium is different in several key aspects. It’s already flying for one thing. But it’s powered by an all-electric engine, whereas competitors are largely moving toward larger aircraft that use a hybrid gas-plus-electric design.
The Lilium Jet is propelled by three electric jet engines, each of which powers a wing inset with a dozen flaps that can tilt from vertical to horizontal orientation. During takeoff and landing, the flaps point straight down, lifting the craft into the air.

Once airborne, the flaps gradually move to the horizontal position, as with a standard jet engine aircraft. While moving horizontally, the Lilium only expends a tenth of the energy required during takeoff. The all-electric design also means zero emissions and a low noise factor.

For now, Lilium Aircraft isn’t releasing any specific numbers on the prototype aircraft’s top speed or potential range, but it is planning for the future. Its price tag remains uncertain, too. The company’s next step is to build a five-passenger version of the Lilium and it’s set some hard-number goals for that aircraft.

“The Lilium Jet will be able to travel at up to 300 kilometres per hour (186 miles per hour) for one hour on a single charge meaning a 19 km (12 miles) journey from Manhattan to JFK Airport could last as little as five minutes,” Wiegand said in the announcement. “The jet’s economy and efficiency mean flights are predicted to cost less than the same journey in a normal road taxi.”