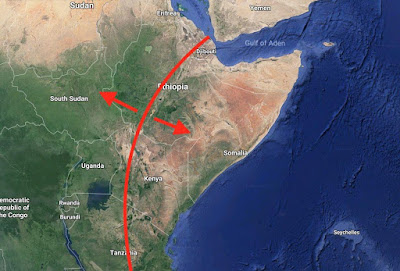 On, September 14 2005, there was an earthquake in a remote part of Africa region on northern Ethiopia. It wasn’t very strong, but it was the first of many. Over the 12  days, there were over a hundred more quakes, most of them also relatively small.

Then on September 26, a nearby volcano called Dabbahu erupted. This was its first eruption in recorded history and it came from a flat part of the volcano a few kilometres from the summit. The eruption didn’t do too much harm no people were seriously hurt and at most, it killed a couple of hundred goats and camels. But it opened up a gigantic crack in the earth, which grew to 60 kilometres long and as much as eight meters wide in only ten days. As you can probably imagine, this caught the attention of geologists around the world.

It turns out that as dramatic as it was the crack was just one of the latest symptoms of an ongoing seismic shake-up in Africa that’s eventually going to rip the continent in two, leading to the creation of a brand new ocean. Right now, Eastern Africa is going through a process called rifting, where the tectonic plates that make up the Earth’s crust and upper mantle pull apart from each other.

A giant plume of magma rising from deep inside the mantle is forcing the African and Arabian plates away from one another, forming a rupture in the Earth ’s surface. The result is the  Great Rift Valley, which stretches more than 3000 kilometres through the eastern part of the continent.

Scientists have been studying the Great Rift Valley since around the turn of the 20th century when an English geologist named John Gregory encounters it for the first time. Even though the theory of plate tectonics wouldn’t be fully accepted for another  59 years or so, he realized how important it might be.

The Valley is a system of several fractures that began forming at different times, and it’s home to lots of seismic activity. The pressure from tons of magma bubbling up is what leads to earthquakes and volcanic eruptions like what happened in 2005.

For a study published in 2018, scientists installed two seismic networks in Ethiopia and Eritrea. These networks or seismographs recorded almost 5000 earthquakes of at least magnitude  2.0 in two years. All that activity has spawned other volcanoes too one called Nyamuragira, erupted fifteen times between 1894 and 1997.

What’s happening in eastern Africa is actually more common at the bottom of the ocean, where magma bubbling up into tectonic rifts forms features called deadline ridges and helps drive the movement of continental plates. But the activity in Africa is giving geologists a chance to study the process up close, no submarines needed.

As it turns out, what happened in 2005 was that a huge length of the rift cracked open all at once, beginning with the volcanic eruption and spreading in both directions from there. This was a bit of a surprise to scientists, who previously thought that such cracks on the ocean floor as well as on land only broke open a little bit at a time.

Eventually, the Horn of Africa is eventually going to split off from the rest of the continental plate and will go on its own way. Large areas of the Great Rift Valley are below sea level will cut off from the ocean only by a small piece of higher land in Eritrea. So, when the split finally happens seawater is going to come floating into the rift, turning the Horn of Africa into an island and creating a new ocean. Odds are none of us will actually get to see the new ocean.

The process has been happening slowly for about 30 millions years, and the rift is only wiring at an average rate of a couple of centimetres a year. So, it will probably be tens or Millions of years before travelling from Sudan to Somalia requires a boat. But in the meantime, we get to watch our planet reshape itself, giving us a teaser for what the world will look like long after we are gone.


Also Read:- What Would Happen If The Earth Will Stop Spinning?