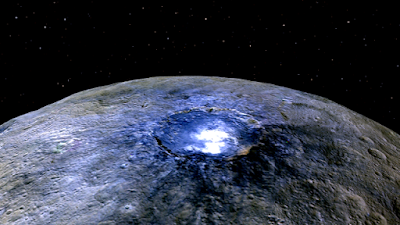 The solar system is full of volcanoes, but not all of them spew or ooze liquid rock. Where it’s cold enough, We also see evidence of cryovolcanoes that spit out slushy ices. So far, we have found them on several gas-giant’s moons and on Pluto. We have even found one in the asteroid belt, on the dwarf planet Ceres. Now scientists report in nature astronomy that they may have discovered up to 31 more cryovolcanoes remnants on Ceres.

It is a volcano wonderland. In 2015, NASA’s Dawn spacecraft arrived at Ceres and it’s been mapping and studying the object’s surface ever since. During its first year, Dawn found one cryovolcano that formed the mountain, Ahuna Mons. It’s probably less than 240 million years old, which isn’t that ancient when we are talking about space volcanoes.

To really understand Ceres’s history, researchers need to study older volcanoes. But it’s been harder to find any because the material they are made out of sags and flattens over time. At Least, that’s what astronomers hypothesized. To confirm that, the team analyzed images of Ceres’s surface, looking for large structures that might be flattened out former cryovolcanoes, they call them viscously relaxed domes. And they found a ton of that Including Ahuna Mons, the team spotted a whopping 32 candidates.

Next, they used Dawn’s camera to estimate the domes heights. For 10 of the 32 structures, they couldn’t get clear enough data, so they were excluded from the analysis, but the rest were all over 1 kilometre tall. Based on a set of assumption, like how large the domes would have been when they started out and how much Ice they contain the team estimated the ages of these domes.

This time they were able to date all but one. They found that most of the structures were between 2 and 700 millions years old, but a couple were over 2 billion years old. This all suggests that, over the last billion years, Ceres got a new cryovolcano every 50 million years so on average.

Besides teaching us more about Ceres history, this study also supported the fact that cryovolcanoes are really different from the hot, lava-spewing mountains on earth. For one, the icy magma on Ceres may originate in the dwarf planet’s crust, not in any sort of mantle like we see on terrestrial planets. Ceres is also a lot less active.

This new study found that the total amount of matter put out by its cryovolcanoes is between 1000 and 100000 times less than that of the inner planets and the moon. Even if you account for surface area, terrestrial volcanic activity is still an order of magnitude higher. This could mean that all cryovolcanic bodies, including places like Pluto and Europa, have similarly low activity, but we will need more data to know for sure.

Still, any day where you find a bunch of new Volcanoes in the asteroid belt is a pretty good day. Without a telescope or a good pair of binoculars, you probably won’t be able to see Ceres from earth. But if you look up on a clear night, you might see a light zooming across the sky for just a few seconds.

It’s not a meteor, and it’s probably not a UFO. Instead, it’s what’s called a satellite flare: a satellite unintentionally catching the light of the sun and bouncing it down to you.  The brightest of these are called Iridium flares, but you will only be able to see them easily for a little longer. So consider this your need up.

These flares started around 1997 and they come from a group of low orbit communications satellites. They are controlled by Iridium communications inc., hence the name. They are not actually made up Iridium or anything.  The flares come from sunlight bouncing off the three silver coated antennae on each satellite. If the angle is just right, they are bright enough to outshine Venus, and even to be visible during the day. But Iridium’s network of 66 satellites is being replaced right now, with a fleet of 75 smaller ones. These new ones aren’t the same shape, so they won’t produce any flares.

As of July 2018, there have been seven successful launches to install new, flare-less satellites and the eighth and final launch is scheduled for November. With new guard coming in some of the old satellites have already begun de-orbiting and they will be spiralling down until they are burned up by the earth’s atmosphere.

But they won’t fall out of the sky all at once. The different satellites all have their own paths to destruction, so while the number of Iridium flares will drop drastically in the next year or so, you might manage to catch one every once in a while. It will just be much harder.

The good news for sky-watchers is that, once the first Iridium satellites are gone other satellite flares will still be out there. They are not as spectacular and while you and I might be a little sad about that, at least one group of people will be happy: astronomers.

Since Iridium flares are so bright, they tend to turn up as annoying streaks in study images. So at least somebody’s happy about these satellites getting destroyed by the friction of the atmosphere.

Also Read:- The World’s Next Ocean