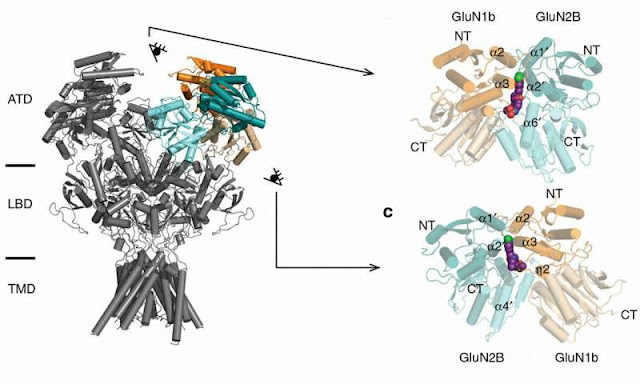 The ideal drug is one that only affects the exact cells and neurons it is designed to treat, without unwanted side effects. This concept is especially important when treating the delicate and complex human brain. Now, scientists at Cold Spring Harbor Laboratory have revealed a mechanism that could lead to this kind of long-sought specificity for treatments of strokes and seizures.
According to Professor Hiro Furukawa, the senior scientist who oversaw this work, “it really comes down to chemistry.” When the human brain is injured, such as during a stroke, parts of the brain begin to acidify. This acidification leads to the rampant release of glutamate.
“We suddenly get more glutamate all over the place that hits the NMDA receptor and that causes the NMDA receptor to start firing quite a lot,” explains Furukawa.
In a healthy brain, the NMDA (N-methyl, D-aspartate) receptor is responsible for controlling the flow of electrically charged atoms, or ions, in and out of a neuron. The “firing” of these signals is crucial for learning and memory formation. However, overactive neurons can lead to disastrous consequences. Abnormal NMDA receptor activities have been observed in various neurological diseases and disorders, such as stroke, seizure, depression, and Alzheimer’s disease, and in individuals born with genetic mutations.
Furukawa’s team, in collaboration with scientists at Emory University, looked for a way to prevent over-firing NMDA receptors without affecting normal regions of the brain.
Previous work had identified promising compounds, called the 93-series, suited to this purpose. Eager to join with the NMDA receptor in an acidic environment, these compounds downregulate the receptor activity, even in the presence of glutamate, thereby preventing excessive neuronal firing.
However, the 93-series compounds sometimes cause the unwanted consequence of inhibiting the NMDA receptors in healthy parts of the brain. That’s why Furukawa and his colleagues set out to determine how they could improve upon the unique features of the 93-series.
Using a method known as X-ray crystallography, the researchers were able to see that a motif on the 93-series compound slots into a tiny, never-before-noticed pocket within the NMDA receptor. Experimentation showed that this pocket is particularly sensitive to the pH around it.
“Now that we see the pH-sensitive pocket within NMDA receptors, we can suggest a different scaffold,” Furukawa explained. “We can redesign the 93-series chemical compound—let’s call it 94-series—in such a way that it can more effectively fit to that pocket and a higher pH sensitivity can be obtained. So, we’re basically just starting our effort to do that.”
Source:- Nature Communications
Also Read:- The Complex Architecture And Epigenomic Impact Of Plant T-DNA insertions