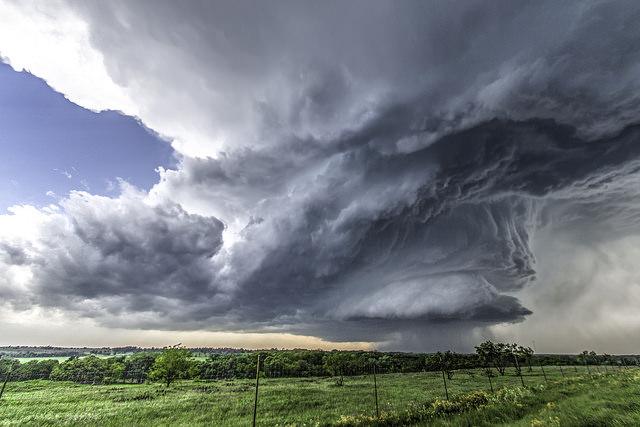 An international team of researchers has found evidence that suggests the cooling effect of aerosols in cumulus and MSC clouds is twice as high as thought. In their paper published in the journal Science, the group describes their analyses of data from NASA’s Moderate Resolution Imaging Spectroradiometer (MODIS) database and what they found.
Lack of reliable estimates of cloud condensation nuclei (CCN) aerosols over oceans has severely limited our ability to quantify their effects on cloud properties and extent of cooling by reflecting solar radiation, a key uncertainty in anthropogenic climate forcing. In the published paper Scientist introduce a methodology for ascribing cloud properties to CCN and isolating the aerosol effects from meteorological effects. Its application showed that, for a given meteorology, CCN explains 3/4 of the variability in clouds radiative cooling effect, mainly through affecting shallow cloud cover and water path. This reveals a much greater sensitivity of cloud radiative forcing to CCN than previously reported, which means too much cooling if incorporated in present climate models. This hints to yet unknown compensating aerosol warming effects, possibly through deep clouds.
Global warming is very much in the news of late, as the planet continues to heat up. But one of the factors at play is very seldom mentioned—the role of clouds in cooling the planet. They do so by reflecting heat from the sun back into space. But how much of the reflecting occurs due to water in the clouds and how much is due to aerosols? This is what the researchers wanted to know, because many modern pollutants actually contribute aerosols to clouds. Many of the gritty elements that make their way into the air from coal-burning plants, for example, find their way into clouds. The researchers wondered if it were possible that such pollutants might actually be helping to cool the planet. To find out, they tapped into MODIS, a database of information from satellites constantly circling the Earth, including, among other things, information on cloud cover. For their study, the researchers looked at data describing the Southern Oceans, from the equator to approximately 40°S—over the summers of 2014 to 2017. The team then developed methodologies for deriving pertinent cloud information, such as water content versus aerosol content, and how much heat they were reflecting.
The researchers found that clouds containing more aerosols reflected more heat than prior estimates had suggested—more than twice as much. More specifically, they found that approximately three-quarters of the amount of heat reflected was due to aerosols. They suggest that such a large percentage shows that the radiative cooling capacity of clouds is much more sensitive to the presence of aerosols than has been thought. They note that this is important because climate change models take into account the amount of heat that clouds reflect back into space. It also shows that the heating effect of greenhouse gases is higher than has been thought because it has been mitigated by the impact of aerosols in clouds.
Source:- Science
Also Read:- Structural Elements Of A pH-Sensitive Inhibitor Binding Site In NMDA Receptors