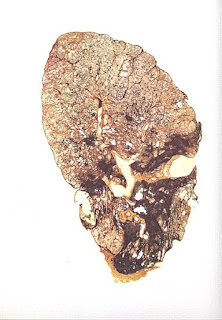 Researchers from the CNRS, the University of Orléans, and the company Artimmune, in collaboration with Turkish clinicians from Atatürk University, have identified a key mechanism of lung inflammation induced by silica exposure, which leads to silicosis, an incurable disease. Their study in mice and patients, published in Nature Communications, shows that this inflammation can be prevented by extracellular DNA degradation, suggesting a new therapeutic target.

Provoked by silica inhalation, silicosis is a fatal disease, the only cure being lung transplantation. Though known as a miner’s disease, it is far from a relic of the past: new operations using high-pressure sand—like denim sandblasting and fracking in shale gas extraction—expose workers and neighbour residents. Worldwide, silicosis still affects tens of millions of people, especially those active in the construction and mining industries, but also textile and dentistry professionals.
Once in the airways, silica microparticles provoke cell stress and death, and finally, chronic inflammation and fibrosis (replacement of normal lung tissue with scar tissue). This leads to an irreversible reduction in respiratory capacity as silica is not eliminated. This is where Valérie Quesniaux’s team at the Experimental and Molecular Immunology and Neurogenetics research laboratory (CNRS/University of Orléans) steps in. They looked at the mechanism underlying silica-induced lung inflammation.

In mice exposed to silica, the researchers showed that DNA released into the airways upon cell death activates a signaling cascade known as the STING pathway. This pathway triggers lung inflammation that ultimately may develop into silicosis. They also demonstrated that treatment with DNase I, an enzyme that degrades the DNA released into the airways, prevents silica-induced lung inflammation.
The team worked with clinicians who for the last decade have been tracking a 21st-century silicosis epidemic in young men that have affected entire Turkish villages. The culprit is denim sandblasting to give jeans a fashionable used appearance. At Atatürk University, Metin Akgün and his colleagues noted a rise in the quantity of released DNA and inflammatory markers in the blood and sputum of silicosis patients. A high level of STING pathway activity was also detected in the lung tissue of patients with pulmonary fibrosis.

Thus the mechanism discovered in mice exposed to silica seems to also play a role in humans. The scientists’ findings suggest that DNase I, already used in the treatment of other pathologies such as cystic fibrosis, might help patients exposed to silica.

Also Read:- Phospholipid-Reactive T Cell Is A Big Player In Cancer And Other Diseases