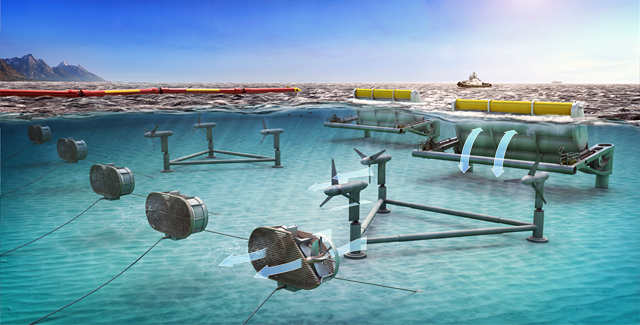 The ocean covers more than 70% of the surface of our the Earth. If somehow we harness the Power of Oceans to fight the World from Climate Change then it will be a big success. Well, International scientists have issued an ambitious 13-point plan for fighting global warming by focusing on ocean-based solutions. So let’s know what those plans are.
In the wake of a devastating report issued by the United Nations Intergovernmental Panel on Climate Change, a group of marine scientists has announced a 13-point plan for using the power of the oceans to combat global warming.
The plan is even more ambitious than it sounds. The research outlines potential techniques to not only reduce atmospheric carbon dioxide levels, but also address the existing crises — like ocean acidification, oxygen loss, and sea-level rise — that are already being triggered by rising temperatures around the world.
The report, published in the journal Frontiers in Marine Science, was authored by 17 international scientists with specialities in oceanography, marine biology, and sustainable energy development. This collaboration is the first major action plan from a newly-formed scientific action group called the Ocean Solutions Initiative (OSI).
Ocean-based solutions to combat climate change have received relatively little attention compared to land-based solutions, says OSI. The researchers hope to persuade world leaders and decision-makers to harness the power of the oceans to undertake this effort in earnest.
“The ocean already removes around 25% of anthropogenic CO2 emissions, and could remove and store much more,” said the study’s lead author, Dr. Jean-Pierre Gattuso. “However, little guidance is currently available on which ocean-based interventions will work best to reduce the scale and impacts of climate change.”
To help spread the word, OSI produced a clever animated video that effectively summarizes the science in plain English. The narration emphasizes the notion, echoed by the IPCC’s dire climate report, that our current climate situation is extremely grave, and that solving the crisis will require multiple strategies.
“In the end, there is no miracle solution,” the narrator says. “Leaving aside those that seem too risky, the others can be helpful on either a local or a global scale. They should be cleverly combined, taking into account regional considerations relating to biodiversity and human activities. Without such subtle arrangements, we will fail.”
The full report gives world policymakers plenty to chew on, but the plan can be broken into four basic goals: reducing atmospheric CO2 concentrations; increasing the proportion of solar radiation reflected back to space; protecting marine ecosystems and manipulating biological and ecological adaptation to climate change impacts.
According to the study, one technology, in particular, has the highest potential for immediately addressing the root cause of climate change. By quickly developing ocean-based renewable energy systems — such as tidal generators, offshore wind farms, and geothermal heat pumps — we can quickly reduce carbon emissions from fossil fuel sources.
“Not only do offshore wind farms, wave energy and other ocean renewables have a very large potential to reduce carbon emissions, but they are also cost-effective and ready to be implemented at a large-scale,” said study co-author Dr. Alexandre Magnan, from France’s Institute for Sustainable Development and International Relations, in a statement.
The action plan also calls for more radical strategies. One potentially effective measure for combating sea acidification, for example, is to add massive quantities of alkaline materials and nutrients to the oceans.
Another suggestion calls for manipulating marine habitats and ecosystems, or even using genetic engineering, to help species adapt more quickly to climate change. A third proposal suggests radical geoengineering methods, such as covering the oceans with a non-toxic foam to reflect excess solar radiation.
The group concedes that many of these extreme measures aren’t yet feasible, and would require years of additional research. The report is structured to compare the proposed solutions in terms of their risks, benefits, and ultimate viability. But provocative proposals are part of the plan. The idea is to get scientists and public policymakers to start thinking, planning, and collaborating. Hopefully, they all come together before it’s too late.
Also Read:- A Hybrid Material That Leads To A Cheaper And More Effective Way To Store Methane