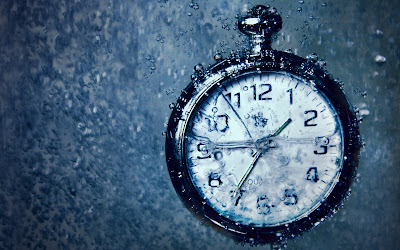 The concept of time as a way to measure the duration of events is not only deeply intuitive, it also plays an important role in our mathematical descriptions of physical systems. For instance, we define an object’s speed as its displacement per a given time. But some researchers theorize that this Newtonian idea of time as an absolute quantity that flows on its own, along with the idea that time is the fourth dimension of spacetime, are incorrect. They propose to replace these concepts of time with a view that corresponds more accurately to the physical world: time as a measure of the numerical order of change.

Amrit Sorli, Davide Fiscaletti, and Dusan Klinar from the Scientific Research Centre Bistra in Ptuj, Slovenia, have published two paper in Physics Essays describing in more detail what this means.
They begin by explaining how we usually assume that time is an absolute physical quantity that plays the role of the independent variable (time, t, is often the x-axis on graphs that show the evolution of a physical system). But, as they note, we never really measure t. What we do measure is an object’s frequency, speed, etc. In other words, what experimentally exists are the motion of an object and the tick of a clock, and we compare the object’s motion to the tick of a clock to measure the object’s frequency, speed, etc. By itself, t has only a mathematical value and no primary physical existence.

This view doesn’t mean that time does not exist, but that time has more to do with space than with the idea of an absolute time. So while 4D spacetime is usually considered to consist of three dimensions of space and one dimension of time, the researchers’ view suggests that it’s more correct to imagine spacetime as four dimensions of space. In other words, as they say, the universe is “timeless.”
“Minkowski space is not 3D + T, it is 4D,” the scientists write in their most recent paper. “The point of view which considers the time to be a physical entity in which material changes occur is here replaced with a more convenient view of time being merely the numerical order of material change. This view corresponds better to the physical world and has more explanatory power in describing immediate physical phenomena: gravity, electrostatic interaction, information transfer by EPR experiment are physical phenomena carried directly by the space in which physical phenomena occur.”

As the scientists added, the roots of this idea come from Einstein himself. “Einstein said, ‘Time has no independent existence apart from the order of events by which we measure it,’” Sorli told, “Time is exactly the order of events: this is my conclusion.” In the future, the scientists plan to investigate the possibility that quantum space has three dimensions of space, as Sorli explained.
“The idea of time being the fourth dimension of space did not bring much progress in physics and is in contradiction with the formalism of special relativity,” he said. “We are now developing a formalism of 3D quantum space based on Planck work. It seems that the universe is 3D from the macro to the micro level to the Planck volume, which per formalism is 3D. In this 3D space there is no ‘length contraction,’ there is no ‘time dilation.’ What really exists is that the velocity of material change is ‘relative’ in the Einstein sense.”

The researchers give an example of this concept of time by imagining a photon that is moving between two points in space. The distance between these two points is composed of Planck distances, each of which is the smallest distance that the photon can move. (The fundamental unit of this motion is Planck time.) When the photon moves a Planck distance, it is moving exclusively in space and not in absolute time, the researchers explain. The photon can be thought of as moving from point 1 to point 2, and its position at point 1 is “before” its position at point 2 in the sense that the number 1 comes before the number 2 in the numerical order. Numerical order is not equivalent to the temporal order, i.e., the number 1 does not exist before the number 2 in time, only numerically.
As the researchers explain, without using time as the fourth dimension of spacetime, the physical world can be described more accurately. As physicist Enrico Prati noted in a recent study, Hamiltonian dynamics (equations in classical mechanics) is robustly well-defined without the concept of absolute time. Other scientists have pointed out that the mathematical model of spacetime does not correspond to physical reality, and propose that a timeless “state space” provides a more accurate framework.

In addition to providing a more accurate description of the nature of physical reality, the concept of time as a numerical order of change can also resolve Zeno’s paradox of Achilles and the Tortoise. In this paradox, the faster Achilles gives the Tortoise a head start in the race. But although Achilles can run 10 times faster than the Tortoise, he can never surpass the Tortoise because, for every distance unit that Achilles runs, the Tortoise also runs 1/10 that distance. So whenever Achilles reaches a point where the Tortoise has been, the Tortoise has also moved slightly ahead. Although the conclusion that Achilles can never surpass the Tortoise is obviously false, there are many different proposed explanations for why the argument is flawed.
Here, the researchers explain that the paradox can be resolved by redefining velocity so that the velocity of both runners is derived from the numerical order of their motion, rather than their displacement and direction in time. From this perspective, Achilles and the Tortoise move through space only, and Achilles can surpass Tortoise in space, though not in absolute time.

The researchers also briefly examine how this new view of time fits with how we intuitively perceive time. Many neurological studies have confirmed that we do have a sense of past, present, and future. This evidence has led to the proposal that the brain represents time with an internal “clock” that emits neural ticks (the “pacemaker-accumulator” model). However, some recent studies have challenged this traditional view, and suggest that the brain represents time in a spatially distributed way, by detecting the activation of different neural populations. Although we perceive events as occurring in the past, present, or future, these concepts may just be part of a psychological frame in which we experience material changes in space.
Finally, the researchers explain that this view of time does not look encouraging for time travellers. “In our view, time travel into the past and future are not possible,” Sorli said. “One can travel in space only, and time is a numerical order of his motion.”
Also Read:- A Hybrid Material That Leads To A Cheaper And More Effective Way To Store Methane