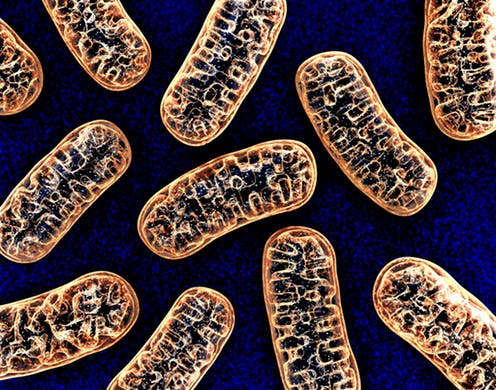 Mitochondrial DNA (mtDNA) is passed from a mother to her children. Fathers cannot pass on their mtDNA, only the extra genetic information on their Y chromosome. Because mtDNA only comes from the mother, it does not change very much, if at all, from generation to generation. Mutations do occur, but not very often less frequently than once per 100 people. Therefore, a person’s mtDNA is probably identical to that of his or her direct maternal ancestor a dozen generations ago, and this fact can be used to connect people across decades. For example, if a particular type of mtDNA was found primarily in Africa, then we could conclude that people from elsewhere in the world who had that type of mtDNA had a maternal ancestor from Africa.
Unlike most of our DNA, mitochondrial DNA is not found in our chromosomes or even in the nucleus (the central enclosure that contains all of the chromosomes) of our cells. Mitochondria are small membrane-bound structures in the cytoplasm of our cells. They are present in all plant and animal cells and are responsible for generating most of the energy needed for cell function. Each mitochondrion contains its own DNA and its own protein-synthesizing machinery. They reproduce by splitting in two after they make a second copy of the DNA. In humans, the mtDNA is in the form of a circle that contains approximately 16,500 nucleotide base pairs of DNA. (DNA molecules consist of two paired strands, and each strand is a long chain of four types of nucleotides, designated A, G, C and T.) In contrast, the DNA in the nucleus is divided into 46 linear chromosomes (23 from each of our parents) that have an average length of more than 200 million base pairs. Each person’s mitochondria come from the cytoplasm of the mother’s egg. The father’s sperm cells also contain mitochondria, but they are not inherited by his offspring.

Before people started to travel around the world, the rare changes that occurred in mtDNA over time resulted in unique types of mtDNA on every continent. Therefore, most contemporary mtDNAs can be assigned to a continent of origin based on the nucleotide sequence of the most variable region (HvrI) of the mtDNA. The HvrI region is about 400 base pairs in length and is the region where the mitochondria start making a new copy of their DNA. It is the region of the DNA molecule where mutations (changes) are most likely to occur. When a scientist determines the order of the four nucleotides in this region, they find a record of all of the mutations that have occurred over time as the mtDNA was passed from mother to daughter from generation to generation. These accumulated mutations are the basis for the unique types of mtDNA found on each continent.
Within continents, regional mtDNA variation can be observed as well. When a woman’s mtDNA contains a new mutation, her descendants are likely to live near her. Therefore, a local area where she lived will be the only place in the world where this particular type of mtDNA is found. However, whenever people moved from one place to another they took their mtDNA with them. In sub-Saharan Africa, for example, there have been extensive movements of people over time. As such, a recent study has shown that approximately half of all African mtDNAs are shared among people from multiple countries in Africa. If an African-American has one of these shared mtDNAs, it is not possible to determine which country was the original home of the maternal ancestor who came to the U.S.
A second problem is that many African-Americans have a particular type of mtDNA that is clearly African in origin but has not yet been observed among the African mtDNAs that have been analyzed. This situation occurs because there is an incredible amount of genetic diversity among Africans and African mtDNAs have not been studied extensively. In fact, the mtDNAs from many African ethnic groups have not been analyzed at all. Additional studies will help with this situation. However, if a particular mtDNA is rare enough to be found in only a small region of Africa, there is a good chance it will be difficult for researchers to find it. Some people suggest comparing these rare mtDNAs to similar mtDNAs that have already been found in Africa. However, when these comparisons are made, the rare mtDNA is usually similar to one of the common mtDNAs that are found in many countries. Therefore, it is not likely that a particular person’s mtDNA can be assigned to a particular country of origin. This conclusion is true not only for African mtDNAs but also mtDNAs from every other continent as well.
Also Read:- 5 Scientific Ideas That Nobody Believed, But Those Were Correct