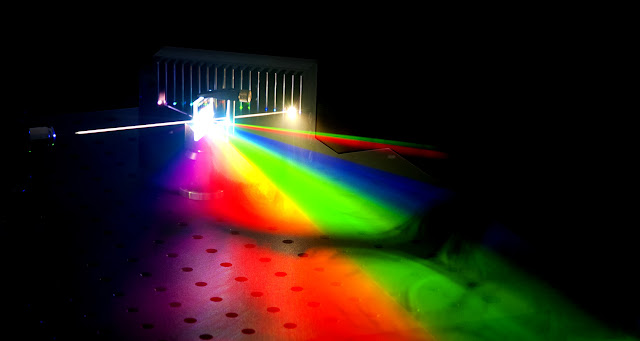 Using machine-learning and an integrated photonic chip, researchers from INRS (Canada) and the University of Sussex (UK) can now customize the properties of broadband light sources. Also called “supercontinuum”, these sources are at the core of new imaging technologies and the approach proposed by the researchers will bring further insight into fundamental aspects of light-matter interactions and ultrafast nonlinear optics. The work is published in the journal Nature Communications on November 20, 2018.

In Professor Roberto Morandotti’s laboratory at INRS, researchers were able to create and manipulate intense ultrashort pulse patterns, which are used to generate a broadband optical spectrum. In recent years, the development of laser sources featuring intense and ultrashort laser pulses that led to the Nobel Prize in Physics in 2018 along with ways to spatially confine and guide light propagation (optical fibre and waveguides) gave rise to optical architectures with immense power. With these new systems, an array of possibilities emerges, such as the generation of supercontinua, i.e extended light spectra generated through intense light-matter interactions.
Such powerful and complex optical systems, and their associated processes, currently form the building blocks of widespread applications spanning from laser science and metrology to advanced sensing and biomedical imaging techniques. To keep pushing the limits of these technologies, more tailoring capability of the light properties is needed. With this work, the international research team unveils a practical and scalable solution to this issue.

Dr Benjamin Wetzel (University of Sussex), the principal investigator of this research led by Prof. Roberto Morandotti (INRS) and Prof. Marco Peccianti (University of Sussex), demonstrated that diverse patterns of femtosecond optical pulses can be prepared and judiciously manipulated. “We have taken advantage of the compactness, stability and sub-nanometer resolution offered by integrated photonic structures to generate reconfigurable bunches of ultrashort optical pulses,” explains Dr Wetzel. “The exponential scaling of the parameter space obtained yields to over 1036 different configurations of achievable pulse patterns, more than the number of stars estimated in the universe,” he concludes.

With such a large number of combinations to seed an optical system known to be highly sensitive to its initial conditions, the researchers have turned to a machine-learning technique in order to explore the outcome of light manipulation. In particular, they have shown that the control and customization of the output light are indeed efficient when conjointly using their system and a suitable algorithm to explore the multitude of available light pulse patterns used to tailor complex physical dynamics.

These exciting results will impact fundamental as well as applied research in a number of fields, as a large part of the current optical systems rely on the same physical and nonlinear effects as the ones underlying supercontinuum generation. The work by the international research team is thus expected to seed the development of other smart optical systems via self-optimization techniques, including the control of optical frequency combs (Nobel 2005) for metrology applications, self-adjusting lasers, pulse processing and amplification (Nobel 2018) as well as the implementation of more fundamental approaches of machine-learning, such as photonic neural network systems.

Also Read:- Study Suggests Mars Moon May Have Got Its Grooves From Rolling Stones