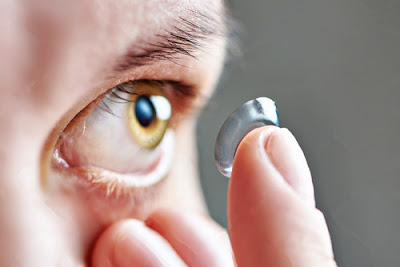 In  August, at the American Chemical Society meeting in Boston, Mass. Rolf Halden enlighten the world with this new threat to our environment. Many people need contact lenses every day for work and play. Until now scientists hadn’t studied what happened to these soft plastic disks after use. Mass. Rolf Halden thought of this and with his graduate students, Charles Rolsky and Varun Kelkar start to investigate.

Mass. Rolf Halden and his graduate students designed some tests to find out what exactly happens to those soft plastics. They started by creating an online survey where they surveyed more than 400 contact lens wearers. The questions asked how many disposed of their lenses improperly. About 20% (one in five) have sent their used contacts down a sink drain or toilet. The researchers then calculated how much plastic would be flushed away each year. Their estimate: 6 to 10 metric ton.  That’s really a lot.

Contact Lenses are not just a normal plastic west problem, Those soft plastics transform into microplastics by microbes, which is a major problem. Aquatic animals are mistaking microplastics for food. Any animal that eats these polluted prey will get those plastics into its body, too. Over time, they risk accumulating ever higher levels of plastic in their bodies. The pollution can reach people, too. It has already shown up in bottled water, sea salt and fish sold for human consumption.

Let’s dig little dipper. Those flushed Contact Lenses goes to sewers. Wastewater treatment plants clean the sewers water by separate out raw sewage (things like poop as well as other items, such as twigs and garbage) and then use microbes to clean the rest of the water. This is where Contact Lenses transform into microplastics by microbes most of the time. The researchers exposed contact lenses to the microbes found in water-treatment plants. These microbes broke some of the chemical bonds. This caused the plastics to begin to fall apart. But they didn’t fully degrade. Instead, they created a lot of tiny bits of debris. Scientists refer to those bits as microplastics. And those would wash out of the water-treatment plant, along with the “cleaned” water. We all know that Wastewater treatment plants release the cleaned water into lakes and rivers.

Environmental scientists have been finding microplastics everywhere, from the ocean floor to mountaintops. Many studies have shown that corals, larval fish and shellfish are mistaking microplastics for food Scientists don’t yet know whether a build-up of microplastics will harm most aquatic animals and people. But its presence is not a good sign. Among other problems with these plastic bits: They tend to accumulate many of toxic water pollutants. These can include pesticides, fossil-fuel wastes and polychlorinated biphenyls. Plastic bits that carry these pollutants now risk bringing them into the diet of animals including people.
Contact lenses are a tiny part of the world’s plastic pollution. A total of 8 million metric tons of plastic end up in the world’s oceans each year. But the unique chemistry of the plastic used in contact lenses could make them a big concern. People need to be more aware of plastics. We throw plastic away without much thought. Any solution must involve changing the way we think about and use of plastic. says Terry Collins. He’s director of the Institute of Green Science at Carnegie Mellon University in Pittsburgh, Pa. He wasn’t involved in the study.

Also Read:-Frances Arnold, George Smith and Gregory Winter have won the 2018 Nobel Prize in chemistry for their work bringing evolution into the laboratory to design custom molecules.