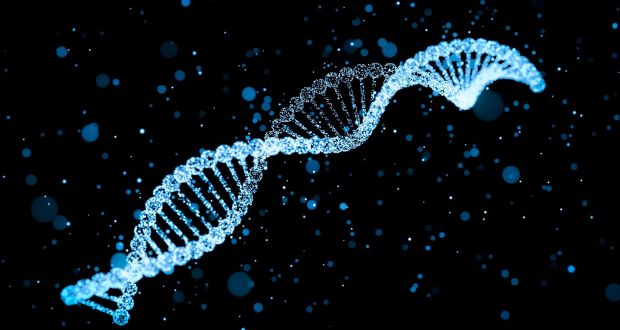 Researchers have discovered age- and health-related differences in fragments of DNA found floating in the bloodstream (not inside cells) called cell-free DNA (cfDNA). These differences could someday be used to determine biological age—whether a person’s body functions as older or younger than their chronological age, the researchers say.
In a proof-of-concept study, researchers extracted cfDNA from blood samples from people in their 20s, people in their 70s, and healthy and unhealthy centenarians. The team led by Nicola Neretti, an assistant professor of molecular biology, cell biology and biochemistry at Brown University, detected differences in how the DNA was packaged in the four groups. The findings were published in the journal Aging Cell.
Specifically, they found nucleosomes—the basic unit of DNA packaging in which a segment of DNA is wrapped around a protein core—were well-spaced in the DNA of the volunteers in their 20s but were less regular in the older groups, especially the unhealthy centenarians, Neretti said. Additionally, the signal from nucleosome spacing for the healthy centenarians was more similar to the signal from the people in their 20s than people in their 70s.
Nucleosome packing is one aspect of the epigenome—the collection of heritable changes that affect gene expression or activity without affecting the DNA sequence, or genome.
“Among other traits, healthy centenarians preserve the epigenomic profile of younger individuals,” Neretti said. “As with anything in ageing, many things work together, and it is not clear what the cause or the effect is. With our cfDNA test, we hope to gain an understanding of these epigenetic changes and what they mean.”
Scientists first found cfDNA in the blood of cancer patients, and the fragments can be useful for diagnosing cancer. Earlier research has found that cfDNA is produced by dying cells, and as the cells die, the DNA is cut in between nucleosomes, Neretti said.
The team at Brown used next-generation sequencing of the cfDNA combined with complex computational analysis to reconstruct the pattern of nucleosome spacing in different regions of the genome—both areas that are typically open for expressing genes as well as areas that are normally tightly packed. The cfDNA extraction and sequencing processes were developed in collaboration with Ana Maria Caetano Faria from the Universidade Federal de Minas Gerais in Brazil.
“cfDNA is somewhat like a message in a bottle that captures what the cell looked like, epigenetically speaking before it died,” Neretti said. “A lot of cellular machinery is involved in maintaining nucleosome spacing, and these components can go downhill as you age. The nucleosomes don’t move apart or become denser themselves. The nucleosome spacing is just the read-out of the changes of that machinery.”
However, he added, changes in nucleosome packing produce changes in the accessibility of different parts of the genome, which leads to even more things going awry, including the freeing of normally locked-down genetic elements called transposons.
The team did detect a reduction in cfDNA signals at the beginning of two common transposons with increasing age. This suggests that these transposons are less locked-down in the unhealthy centenarians and people in their 70s and thus more likely to be “copying and pasting” themselves into the genome, causing genetic mayhem.
The study only analyzed the cfDNA of 12 individuals from Bologna, Italy—three from each group. The samples were collected by collaborator Claudio Franceschi, from the University of Bologna. A larger study is needed to gain the information necessary to use these epigenetic markers to predict biological age, Neretti said. However, because the cfDNA test uses easy-to-collect blood instead of invasive tissue samples, he thinks it will be straightforward to expand the proof-of-concept study.
“Ideally, you would like to track a population of individuals over 20 or 30 years to see how each individual’s epigenome changes, and the rate of change, as they age,” he said. A large study could allow the association of epigenomic differences with health conditions, lifestyles or diets, he added.
Meanwhile, the research team is refining the test. They are working to optimize the process of extracting cfDNA from the blood. In mice, they can reliably get the amount of cfDNA they need from a quarter teaspoon of blood. Neretti thinks that they don’t need to sequence the whole genome to detect the age- and health-related epigenetic changes. For this study, they did whole-genome sequencing, but he expects that sequencing 2% to 5% of the genome could be sufficient.
In addition to refining the nucleosome positioning analysis, the researchers would like to study another kind of epigenetic marker—DNA methylation patterns—in the cfDNA, Neretti said. This would provide additional information, including markers that can indicate what tissue the cfDNA came from. Determining the sources of cfDNA at different ages—or what tissues are experiencing a lot of cell death—could provide insights into the ageing process.
Better understanding the epigenetic changes of the ageing process could aid in developing treatments for age-associated disorders or someday be used to determine whether your body is ageing faster or slower than typical, Neretti added.
Source:Aging Cell
Also Read:- Role Of The Plasmoid Instability In Magnetohydrodynamic Turbulence