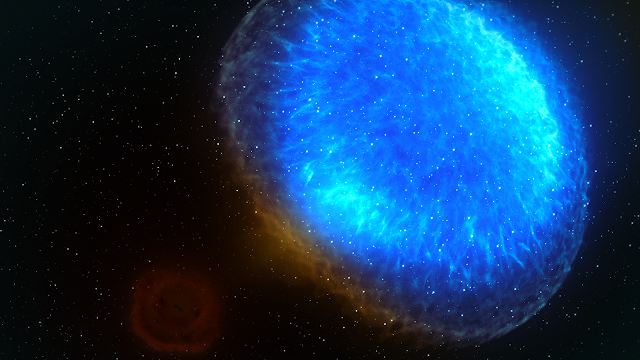 In 1973, Russian physicist A.B. Migdal predicted the phenomenon of pion condensation above a critical, extremely high—several times higher than that for the normal matter— nuclear density. Although this condensation has never been observed, it is expected to play a key role in the rapid cooling process of the core of neutron stars. These city-size heavy stellar objects are so dense that on Earth, one teaspoonful would weigh a billion tons.
Recently, researchers from the RIKEN Nishina Center for Accelerator-Based Science and Kyushu University, performing an experiment at the RIKEN RI Beam Factory on a very neutron-rich tin isotope, investigated whether this process could really occur in neutron stars having the mass of about 1.4 times that of our sun. Similar investigations were conducted previously on stable isotopes, such as 90Zr or 208Pb, but this time the researchers decided to study the case of 132Sn, an isotope of tin. This doubly magic unstable nucleus has a fairly simple structure that makes the theoretical calculations easily compared to other isotopes with similar mass. Furthermore, 132Sn with its large neutron excess (it consists of 50 protons and 82 neutrons) provides better conditions than the stable isotopes for extending this study toward the pure neutron matter in the neutron stars.
A secondary cocktail beam containing 132Sn was produced by projectile fragmentation of a uranium primary beam colliding with thick a beryllium target. Then, a liquid hydrogen target was irradiated with 132Sn. Resulting in the collective excitation of the neutrons and protons of the tin nuclei, with the neutron spin and proton spin oscillating out of phase. This excitation mode, called “giant resonance,” is suitable for studying the short-range interactions that, while being crucial in the onset of pion condensation, are complex and extremely difficult to measure.
According to Masaki Sasano from RIKEN Nishina Center, who is one of the first authors of this study, their result, which was published in the Physical Review Letters journal, shows that the pion condensation should occur at around two times normal nuclear density, which can be realized in a neutron star with a mass of 1.4 times that of the sun. Sasano said that in order to understand the possibility of the pion condensation fully, they plan to extend these unique studies of giant resonances to other neutron-rich nuclei that are far beyond the stability line, having large neutron-proton asymmetry.
Source:Physical Review Letters
Also Read:-Cell‐free DNA As A Biomarker Of Aging