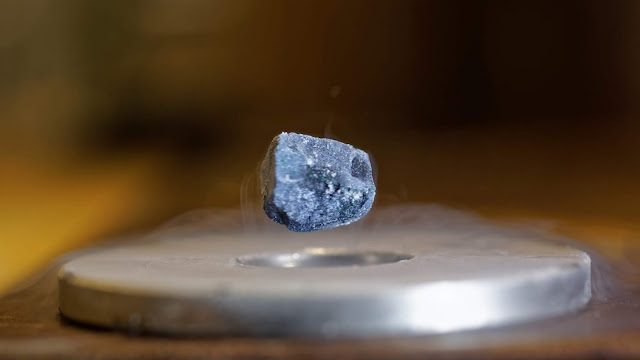 That means they can conduct electricity more efficiently than any other material. Imagine, electricity buzzing along superconducting wires without losing any energy to. But these materials don’t just get their powers from their particular microscopic structure. They also have to be really, really cold many hundreds of negative degrees Celsius.
If we could use superconductors in electronics, those devices would theoretically run at perfect or near perfect efficiency. They would output the same amount of energy that’s put into them. That would be super useful, you can imagine, when trying to get electricity into your home.

The main issue for achieving supper-conductivity is to cool the temperature of the material down to fricking near 0 Kelvin. So far, the material that’s achieved superconductivity closest to room temperature is a rare hydrogen sulphur compound that maintains its properties at up to steamy -70 degrees Celsius. But that’s only because it was at a pressure over a million times the one we comfortably live at. Bu, Despair not, An exciting new research project has unveiled new materials that get us closer to the goal of superconductors that we could use in real life at room temperature and pressure.
Scientists have experimentally confirmed the existence of strange new uranium compounds and they predict some could even achieve superconductivity close to room temperature. These new compounds are what’s known as uranium hydrides – a mix of uranium and hydrogen.

Until recently, the only example of this species of the molecule was uranium trihydride (UH3) which once played a vital role in nuclear experiments in the 1940s. Now we can add a few more to the list, including UH5, UH6, UH7, UH8, UH9, U2H13 and U2H17.
To create them, a team of researchers from the US, Russia, and China applied pressure of up to 5 million atmospheres to a mixture of uranium and hydrogen, whipping up a generous assortment of uranium hydrides that have never been seen before. Slowly stepping up the pressure, the researchers successfully created a total of 14 new uranium hydride compounds, some in multiple phases.

Their creation is more than academic. Chunky metal hydrides like these could potentially unlock the secrets of high-temperature superconductivity.
“The two highlights of our results are that high pressure produces an amazingly rich collection of hydrides, most of which do not fit into classical chemistry,” says fellow MIPT researcher Artem Oganov. “And that these hydrides can actually be obtained and become superconducting at very low pressures, perhaps even at atmospheric pressure.”

“After H3S was discovered, scientists started eagerly searching for superconducting hydrides in other non-metals,” says Ivan Kruglov from the Moscow Institute of Physics and Technology (MIPT).
As promising as non-metal hydrides are, there is a good reason to think metal hydrides shouldn’t be overlooked. Physicists from MIPT and Skoltech in Russia applied an algorithm to the actinide series of elements to determine which of those might form stable hydrides.

The team has since turned their attention to uranium, suspecting hydrides made of this chunky element could also become superconductors without the need for enormous pressure. While the idea looked good on paper, this is the first time they’ve been able to show the compounds can actually exist and behaved as predicted. Importantly, they showed signs of superconducting under much lower pressures than other compounds.
“Our study showed that metal hydrides hold as much potential as non-metals in terms of high-temperature superconductivity,” says Kruglov. To be clear, this doesn’t mean we’ve cracked the secret to superconductivity. Not by a long shot. The warmest any of these new hydrides can transfer a current without resistance is still a prohibitively low –219 degrees Celsius (-362 Fahrenheit).

The team thinks they can push up the temperature by doping the material with other additives and potentially bring down the pressure even further to something far more reasonable.
But the real end goal is to develop a better understanding of how different materials manage the mind-boggling feat of effort-free conductivity in order to construct the ideal superconductor. It is slow going deciphering superconductor’s secrets. But the end result will be worth it.

Several cities in Japan, Korea, and China already use superconducting technology in MagLev trains. These trains can reach super high speeds because there’s no friction of the train on the track because the train is floating ABOVE the track.

Also Read:- Facing Your Fears Can Help You Conquer Them, But How?