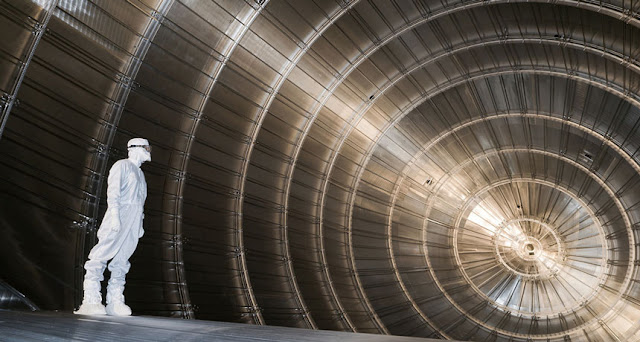 There are things in nature so huge or complex that the only way to really study them is to build something enormous. Like, physicists didn’t just find the Higgs boson by fishing it out from under the couch. It took the world’s largest machine, the Large Hadron Collider, to observe it. But when it comes to outright size, there are a few scientific experiments that can even give the Large Hadron Collider a run for its money. 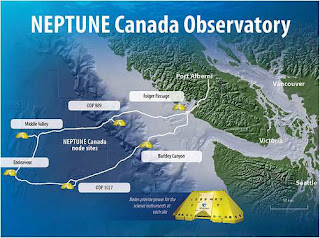 Take the Northeast Pacific Time-series Undersea Networked Experiments or NEPTUNE, for example, which is a really big name for a really big network of scientific equipment off the coast of British Columbia. You may have noticed that the ocean is gigantic. I mean, seriously. About 71% of the Earth’s surface is covered in water and despite all the seafaring we have done as a species, there’s still a ton we don’t know about what’ is going on deep under the surface.
NEPTUNE: It’s made up of an 800-kilometre loop of fibre optic cable that ranges from just 23 meters deep to 2.4 kilometres below the surface. The cable serves as a link between five locations that have all kinds of different equipment for studying the ocean and allows them to transmit data back to land. This equipment includes things like hydrophones, which are special underwater microphones used to listen to the sounds of life down there from swarms of plankton to whales. There is also an adorable robot called Wally and scientists use Wally to study microbes that survive on deposits of methane, on the ocean floor. And, there are cameras that provide livestreams of undersea activity, like mass crab migrations. You can watch that here:- http://www.oceannetworks.ca/sights-sounds/live-video.
Since it started operating in 2009, NEPTUNE has given us tons of data about ecosystems that adapted to the extreme pressure and lack of sunlight on the seafloor. And because it covers almost the entirety of one of Earth’s tectonic plates, scientists can use it to help build a more accurate model for things like earthquakes. 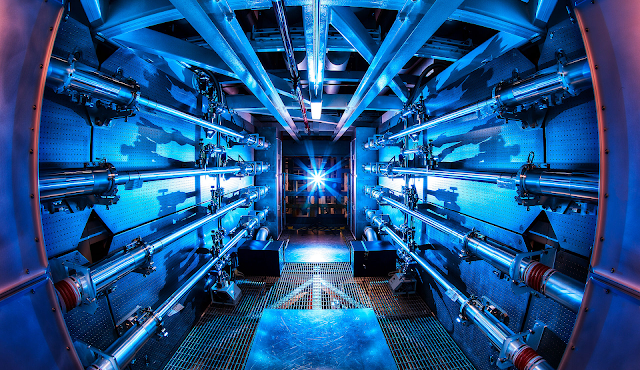 Further south, in Livermore, California, is one of the world’s biggest and heaviest indoor experiments. It is called the National Ignition Facility or NIF and its goal is to show that nuclear fusion, where two smaller atoms combine into a larger one, could be a viable source of power.
Existing nuclear power plants work using nuclear fission: they split atoms apart and turn the resulting energy into electricity. Unfortunately, in the process, they also produce waste that stays dangerously radioactive for decades. But fusing certain atoms together also releases energy and unlike splitting atoms, the process could potentially produce much less radioactive waste. Problem is, pumping enough energy into atoms to get them to fuse is challenging.
So, the NIF’s strategy is to use the largest laser in the world, which is housed in a ten-story building more than 300 meters long. Most of that space is for the laser amplifiers 120 metric tons’ worth of a special type of glass. Under the right conditions, it is capable of giving a series of 192 normal laser pulses 10 billion times more energy than they started out with. And then, all that laser energy gets fired into a gold canister about the size of a pencil eraser, which contains a target pellet filled with hydrogen. The beams heat up the pellet inside to over 3 million degrees Celsius, which is hot enough to make it implode in just the right way for the hydrogen atoms to start fusing with each other.
The chain reaction releases energetic, radioactive particles like neutrons, ideally with more energy than what the laser beams put into kickstarting the reaction in the first place. That’s what physicists call ignition. There is just one small problem. The NIF hasn’t achieved full ignition yet at least, not the kind that gets us more energy than we put in. And even if the NIF does achieve ignition, there are still a whole load of problems to tackle, like how to extract that energy efficiently and deal with all your expensive equipment being irradiated by the same particles you want to get energy from. But researchers are working on it, and eventually, that giant building full of glass could lead to power plants that use nuclear fusion.
So, NEPTUNE and the NIF are plenty big in their own ways. But neither of them qualify as the biggest experiment humanity’s working on. That award goes to the Laser Interferometer Space Antenna or LISA. Its a proposal to use three small spacecraft arranged about 1.6 million kilometres away from each other in space four times the distance from the Earth to the Moon! The spacecraft would shoot laser beams back and forth to measure gravitational waves, ripples in the fabric of space-time generated when massive objects like black holes accelerate when they are merging.
In 2016, researchers detected gravitational waves for the first time using LIGO, a similar, but much smaller experiment set up here on Earth. The waves came from two relatively small black holes suddenly merging the whole thing took less than a second. And detecting them involved measuring a change in distance of only one ten thousandths the width of a proton.
So there is a reason it took us so long. LISA’s designed to detect gravitational waves that are even more subtle — ones that come from events that can last for minutes or even hours, like when the much-more-massive black holes in the centres of galaxies merge. 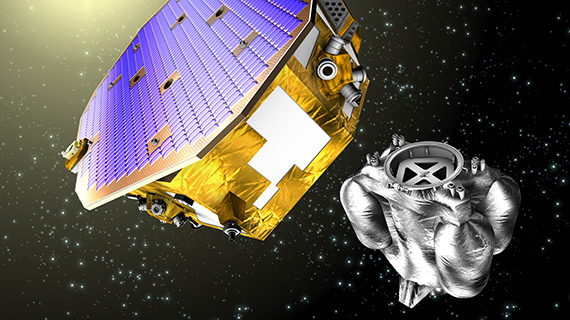 LISA probably won’t make it off the ground until about 2034. But in 2017 NASA completed a mission with a sort of mini version of LISA, called LISA Pathfinder, that showed the technology can function well enough to make measurements in space.
So while it won’t technically be on Earth, when it eventually launches LISA will be the biggest observatory we have ever built by far. And at 1.6 million kilometres across, that is going to be a tough record to break.
Source: Ocean Networks Canada, Lawrence Livermore National Laboratory, NASA
Also Read:- Why Does Time Pass?