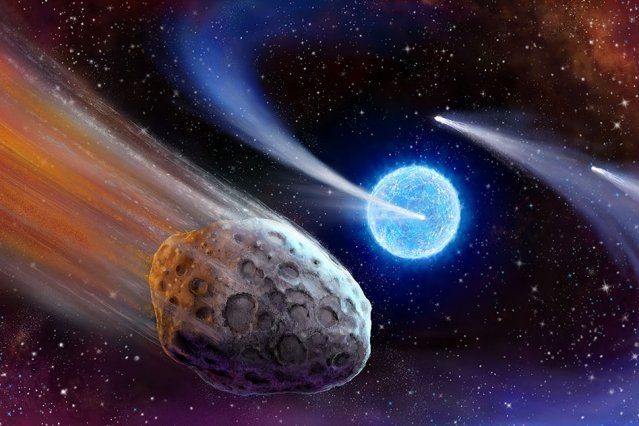 What Are Comets?
Comets are small, fragile, irregularly shaped bodies composed of a mixture of grains and frozen gases. They have highly elliptical orbits that repeatedly bring them very close to the Sun and then swing them deeply into space, often beyond the orbit of Pluto.
Comet structures are diverse and very dynamic, but they all develop a surrounding cloud of diffuse material, called a coma, that usually grows in size and brightness as the comet approaches the Sun. A small, bright nucleus (less than 10 km in diameter) is sometimes visible in the middle of the coma. The coma and the nucleus together constitute the head of the comet.
As comets approach the Sun they develop enormous tails of luminous material that extend for millions of kilometers from the head, away from the Sun. When far from the Sun, the nucleus is very cold and its material is frozen solid within the nucleus. In this state comets are sometimes referred to as a “dirty iceberg” or “dirty snowball,” since about half of their material is ice. When a comet approaches within a few Astronomical Units (1 AU equals approximately 150 million kilometers) of the Sun, the surface of the nucleus begins to warm, and volatile material on the comet evaporates. The evaporating gases carry small grains with them, forming the comet’s coma of gas and dust.
When the nucleus is frozen, it can be seen only by reflected sunlight. However, when a coma develops, dust reflects still more sunlight, and gas in the coma absorbs ultraviolet radiation and begins to fluoresce.
Why Comets Are Important?
Because they may be the oldest, most primitive bodies in the solar system preserving the earliest record of material from the nebula which formed the sun and the planets.
Because they bring volatile light elements to the planets, playing a role in forming oceans and atmospheres.
Because they are the most organic-rich bodies in the solar system providing ready-formed molecules possibly involved in the origin of life on Earth.
Because they impact the Earth and other planets at hypervelocities, causing major changes in climate and dramatically affecting the ecological balance, possibly including the extinction of the Dinosaurs.
Because they are the building blocks of planetary systems around other stars.
Also Read:- Sun Allergy Symptoms, Causes And Treatment