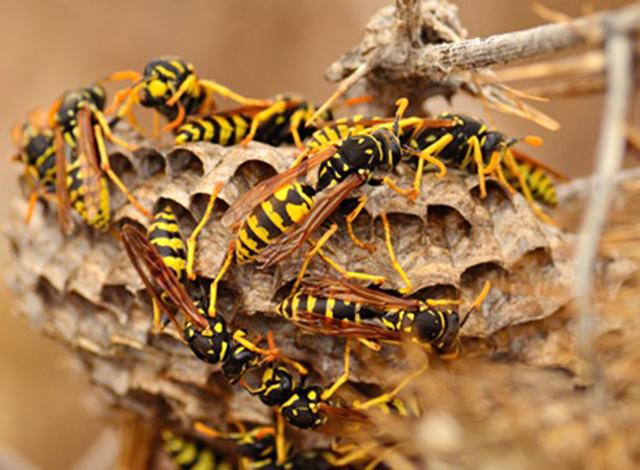 The venom of insects such as wasps and bees is full of compounds that can kill bacteria. Unfortunately, many of these compounds are also toxic to humans, making it impossible to use them as antibiotic drugs.
After performing a systematic study of the antimicrobial properties of a toxin normally found in a South American wasp, researchers at MIT have now created variants of the peptide that are potent against bacteria but nontoxic to human cells.
In a study of mice, the researchers found that their strongest peptide could completely eliminate Pseudomonas aeruginosa, a strain of bacteria that causes respiratory and other infections and is resistant to most antibiotics.
“We’ve repurposed a toxic molecule into one that is a viable molecule to treat infections,” says Cesar de la Fuente-Nunez, an MIT postdoc. “By systematically analyzing the structure and function of these peptides, we’ve been able to tune their properties and activity.”
De la Fuente-Nunez is one of the senior authors of the paper, which appears in the Dec. 7 issue of the journal Nature Communications Biology. Timothy Lu, an MIT associate professor of electrical engineering and computer science and of biological engineering, and Vani Oliveira, an associate professor at the Federal University of ABC in Brazil, are also senior authors. The paper’s lead author is Marcelo Der Torossian Torres, a former visiting student at MIT.
As part of their immune defences, many organisms, including humans, produce peptides that can kill bacteria. To help fight the emergence of antibiotic-resistant bacteria, many scientists have been trying to adapt these peptides as potential new drugs.
The peptide that de la Fuente-Nunez and his colleagues focused on in this study was isolated from a wasp known as Polybia paulista. This peptide is small enough only 12 amino acids that the researchers believed it would be feasible to create some variants of the peptide and test them to see if they might become more potent against microbes and less harmful to humans.
“It’s a small enough peptide that you can try to mutate as many amino acid residues as possible to try to figure out how each building block is contributing to antimicrobial activity and toxicity,” de la Fuente-Nunez says. Like many other antimicrobial peptides, this venom-derived peptide is believed to kill microbes by disrupting bacterial cell membranes. The peptide has an alpha helical structure, which is known to interact strongly with cell membranes.
In the first phase of their study, the researchers created a few dozen variants of the original peptide and then measured how those changes affected the peptides’ helical structure and their hydrophobicity, which also helps to determine how well the peptides interact with membranes. They then tested these peptides against seven strains of bacteria and two of fungus, making it possible to correlate their structure and physicochemical properties with their antimicrobial potency.
Based on the structure-function relationships they identified, the researchers then designed another few dozen peptides for further testing. They were able to identify optimal percentages of hydrophobic amino acids and positively charged amino acids, and they also identified a cluster of amino acids where any changes would impair the overall function of the molecule.
To measure the peptides’ toxicity, the researchers exposed them to human embryonic kidney cells grown in a lab dish. They selected the most promising compounds to test in mice infected with Pseudomonas aeruginosa, a common source of respiratory and urinary tract infections and found that several of the peptides could reduce the infection. One of them, given at a high dose, could eliminate it completely.
“After four days, that compound can completely clear the infection, and that was quite surprising and exciting because we don’t typically see that with other experimental antimicrobials or other antibiotics that we’ve tested in the past with this particular mouse model,” de la Fuente-Nunez says.
The researchers have begun creating additional variants that they hope will be able to clear infections at lower doses. De la Fuente-Nunez also plans to apply this approach to other types of naturally occurring antimicrobial peptides when he joins the faculty of the University of Pennsylvania next year.
“I do think some of the principles that we’ve learned here can be applicable to other similar peptides that are derived from nature,” he says. “Things like helicity and hydrophobicity are very important for a lot of these molecules, and some of the rules that we’ve learned here can definitely be extrapolated.”
Source: Communications Biology
Also Read:- Open-source Discovery Of Chemical Leads For Next-Generation Chemoprotective Antimalarials