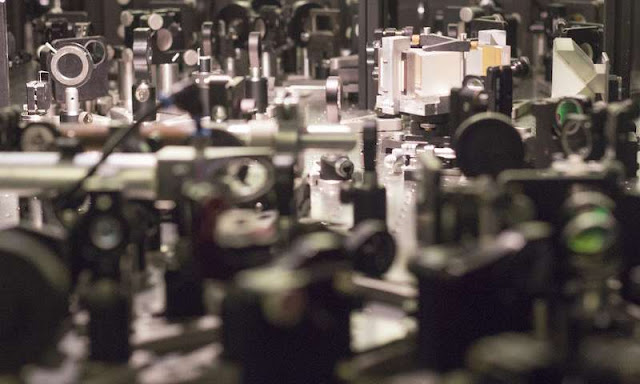 Electrons are not just little spheres, bouncing through material like a rubber ball. The laws of quantum physics tell us that electrons behave like waves. In some materials, these electron waves can take on rather complicated shapes. The so-called “topological materials” produce electron states that can be very interesting for technical applications, but it is extremely difficult to identify these materials and their associated electronic states.
TU Wien (Vienna) and several research groups from China have now developed new ideas and implemented them in an experiment. A “crystal ” made of light waves is created to hold atoms in a very special geometric pattern. These “light crystals”, which have been used in different ways for the manipulation of atoms, can now be used to deliberately drive the system out of equilibrium. By switching between simple and complicated states, the system reveals whether or not it has topologically interesting states. These findings have now been published in the journal Physical Review Letters.
The importance of topology can easily be seen if we pack too many things into a shopping bag: a bread roll may be slightly crushed and squeezed into a shape similar to a banana. Bread rolls and bananas have the same basic geometric structure, topologically they are the same. On the other hand, a donut has a hole in the middle—its topology is different. Even if it is slightly squeezed, its shape can still be easily distinguished from that of the bread roll.
“It is similar with quantum states,” explains Prof. Jörg Schmiedmayer from Vienna Center for Quantum Science and Technology (VCQ) at TU Wien. “Quantum states can have a nontrivial topology which protects them with respect to certain perturbations. That’s what makes them so interesting for technology because you always have to deal with perturbations in every experiment and in every real-world technological application.” In 2016, the Nobel Prize in Physics for research was awarded for research on topological states of matter, but it is still considered extremely difficult to determine whether or not a certain material allows topologically interesting quantum states.
“Quantum states that are not in equilibrium, are changing rapidly,” says Jörg Schmiedmayer. “These dynamics is notoriously difficult to understand, but as we have shown, it is a great way to obtain extremely interesting information about the system.” Schmiedmayer cooperated with research teams from China. “The experiment was led by Prof. Shuai Chen, in the research group of Prof. Jian-Wei Pan. Both were once collaborators in my group in Heidelberg, and ever since their return to China, we have been work closely together,” says Schmiedmayer. The TU Vienna and the Chinese University of Science and Technology (USTC, Heifei, China) signed a cooperation agreement in 2016, which strengthened research cooperation, especially in the field of physics.
With the help of interfering light waves, atoms can be held in pre-defined places, creating a regular grid of atoms, similar to a crystal, the atoms taking the roles of the electrons in a solid state crystal. By changing the light, the geometry of the atomic arrangement can be switched, in order to examine how the electron states would behave in a real solid-state material.
“With this change, a massive imbalance is suddenly being generated,” says Jörg Schmiedmayer. “The quantum states must rearrange and approach a new equilibrium, much like balls rolling down a hill until they find equilibrium in the valley. And during this process, we can see clear signatures that tell us whether topologically interesting states are to be found or not. “
This is an important new insight for research on topological materials. One could even adapt the artificial light crystals to simulate certain crystal structures and in order to find new topological materials.
Source: Physical Review Letters
Also Read:-Cold-water Diving In The Tropics? External Auditory Exostoses Among The Pre-Columbian Inhabitants Of Panama