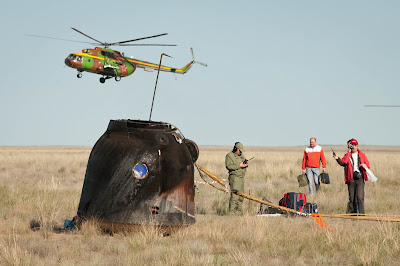 On Oct. 11, 2018, two astronauts piled into a Russian Soyuz spacecraft for what should have been a routine trip to the International Space Station. But just a few minutes after liftoff, an issue with the Soyuz’s rocket.triggered an emergency landing. But Astronauts are safe both crewmembers survived in good condition.

A Russian Soyuz rocket carrying a new U.S.-Russian crew to the International Space Station failed during its ascent Thursday (Oct. 11), sending its crew capsule falling back toward Earth in a ballistic re-entry, NASA officials said.

A search-and-rescue team has reached the landing site, both crewmembers are in good condition and have left the Soyuz capsule as of 6:10 a.m. EDT, NASA spokesperson Brandi Dean said during live television commentary. Russian space agency Roscosmos has released photographs of both astronauts being checked over after their abrupt landing.

The Soyuz rocket and its Soyuz MS-10 space capsule lifted off from the Baikonur Cosmodrome in Kazakhstan at about 4:47 a.m. EDT  with NASA astronaut Nick Hague and cosmonaut Alexey Ovchinin aboard. The pair were due to join the three-person Expedition 57 crew already aboard the International Space Station. But something went wrong minutes after liftoff, sending the Soyuz capsule into a ballistic re-entry, NASA officials said.

The three astronauts currently on board the space station have been informed of the failed launch and their schedule for the day is being reshuffled since they’ll no longer be able to greet the incoming duo. Mission Control told astronauts aboard the space station that during the landing, “the boys” experienced forces of about 6.7 G in a call that NASA later broadcast on the live commentary.

The pair landed about 20 kilometres (12 miles) east of Dzhezkazgan, Kazakhstan. Search and rescue crews are pre-staged for this kind of events.  As soon as the crew made emergency landing helicopters were already been dispatched to look for the Soyuz space capsule.

NASA has not provided much detail about the failure but confirmed in a tweet that there was a problem with booster separation. But During the live broadcast of the launch, narration from Mission Control suggested that the booster failed to separate from the Soyuz capsule.

NASA has confirmed that Roscosmos has already created a commission to investigate the cause of the anomaly, although it doesn’t expect its counterpart to hold a press conference today. Hague and Ovchinin are being taken from their emergency landing site to Moscow. In a statement, NASA Administrator Jim Bridenstine confirmed he had been informed the two crewmembers were safe.

The launch failure follows close on the heels of another Soyuz issue, in which a hole was discovered Aug. 29 on the MS-09 spacecraft that delivered the most recent crew to the space station. That 0.08-inch (2-millimetre) hole in the orbital module of the Soyuz vehicle created a small air leak on the space station that was detected by flight controllers on the ground and ultimately repaired by astronauts and cosmonauts on the space station. An investigation into that anomaly and how the hole was formed is also underway.

For Now, there will be an investigation for this and after that, they will decide to fly again.
Also Read:-The Remote Colombian Town RICAURTE Is A Home Of Fragile X Syndrome Suffering People Not “Los bobos”