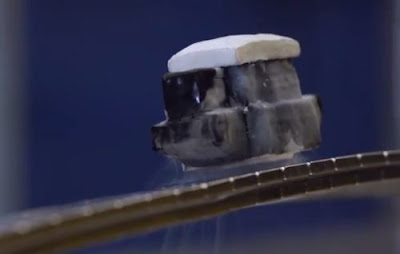 Using solid-state nuclear magnetic resonance (ssNMR) techniques, scientists at the U.S. Department of Energy’s Ames Laboratory discovered a new quantum criticality in a superconducting material, leading to a greater understanding of the link between magnetism and unconventional superconductivity.

Most iron-arsenide superconductors display both magnetic and structural (or nematic) transitions, making it difficult to understand the role they play in superconducting states. But a compound of calcium, potassium, iron, and arsenic, and doped with small amounts of nickel, CaK(Fe1−xNix)4As4, first made at Ames Laboratory, has been discovered to exhibit a new magnetic state called a hedgehog spin-vortex crystal anti-ferromagnetic state without nematic transitions.

“Spin or nematic fluctuations can be considered to play an important role for unconventional superconductivity,” said Yuji Furukawa, a senior scientist at Ames Laboratory and a professor of Physics and Astronomy at Iowa State University. “With this particular material, we were able to examine only the magnetic fluctuations, and NMR is one of the most sensitive techniques for examining them.” He continued, “using 75As NMR, we discovered that CaK(Fe1−xNix)4As4 is located at a hedgehog spin-vortex crystal anti-ferromagnetic quantum critical point which is avoided due to superconductivity. The discovery of the magnetic quantum criticality without nematicity in CaK(Fe1−xNix)4As4 suggests that the spin fluctuations are the primary driver of superconductivity.”

Furukawa’s discovery was a collaboration between Ames Laboratory’s world-leading SSNMR team and the lab’s condensed matter physicists, including Paul Canfield, a senior scientist at Ames Laboratory and a Distinguished Professor and the Robert Allen Wright Professor of Physics and Astronomy at Iowa State University.

“This is a new type of magnetic order,” said Canfield. “You have this interesting interaction between superconductivity and magnetism from high temperatures in the normal state. This gives us some sense that this high-temperature superconductivity may be coming from this near quantum critical anti-ferromagnetic transition.”