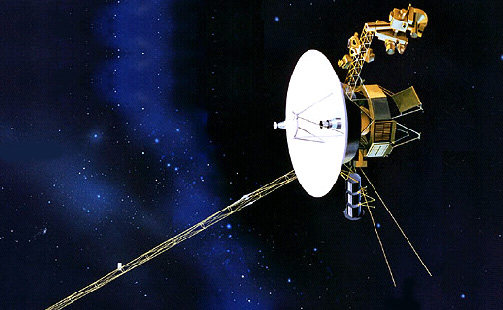 This alignment was discovered by Gary Flandro in 1964 while working at JPL and allowed the planers to come up with the Grand Tour. This would allow one spacecraft to visit all four planets by using gravity assist and cut their mission time from 40 years to less than 10 if they launched in 1977. The original Grand Tour was to include Pluto but due to funding limitations it was left out but Pluto was visited by the New Horizons probe in 2015. Voyager 2 was the first to set off in 1977 on other grand tour of the four outer planets and eventually travelled out in the plane of a solar system. This same technique of gravity assist has since been used on the Galileo, Cassini and the New Horizons missions.
Voyager 1 launched three weeks after Voyager 2 on a quicker route to visit Jupiter and Saturn and do a flyby of Saturn’s moon Titan. But this would then put it on an upward trajectory and out of a plane of a solar system to interstellar space.
Now we have a plan but we still need something to guide our spacecraft along its planned trajectory. For this, they use an inertial navigation system basically this is a highly accurate system of gyroscopes, accelerometers and other sensors that can detect movement of a craft in any direction in space. Using this information the navigators can work out if the craft is on course.
However, inertial navigation systems are mechanical devices and as such suffer from what is known as integration drift tiny errors in the gyroscopes and sensors. This is compounded over time because they calculate their position as they move along from the last previously calculated position, so the longer they go the more the errors build up.
The error in a good system is less than 1.1 kilometres per hour so if a journey to Mars lasted eight months, which will be 5760 hours, then the error would be about 6300 km by the time it reached Mars, far too much when you have to enter an orbit with an accuracy of just a few kilometres. To compensate for the integration drift, another fixed reference system is needed and this is the Stars.
Just as marine navigators used a sextant to work out their position, spacecraft use optical sensors and cameras to determine their position and reset the inertial navigation systems. On the Apollo missions, the crew used a space sextant to correct the drift on the onboard navigation system. On the Voyager probes, they used a star tracker that could look for a very bright guide star which in voyagers case was Canopus. It also had a Sun sensor that could be used in conjunction with a radio signal from Earth. Newer spacecraft have more sophisticated systems which use cameras to look for known objects like planets and even comets and asteroids as well as the target itself.
Even with the best-planned course things will vary along the way. Other forces can also affect a craft deep in space. The solar wind, for example, the flow of charged particles from the Sun can over time gradually change the course of a spacecraft and has to be corrected for and timing is everything. Our spacecraft must arrive at particular points in space along the journey within a very small window of time. Travelling at 30 km/s and approaching a planet to use its gravity to swing by and change course, if you are out by more than a few minutes or so it could mean the difference between being sucked into the planet by its gravity or undershooting the planned course.
To communicate and work out the distance and speed of a craft, NASA uses the Deep Space Network. This is a network of radio telescopes spread around the world so that at least one will be in contact with a spacecraft at all times. By sending a radio signal to the craft and having it returned the signal and using the Doppler effect and a highly accurate atomic clock the slight difference between the two signals can be used to calculate its distance from earth to living 3 meters and its speed to within 180 millimetres per hour. Combining all this information we are now able to send space probes with incredible accuracy, so much so that we can now land on a comet as we did with the Rosetta probe and it’s Philae lander and to take close-up pictures of Pluto within a two-hour time window, 9 years after launch and 5 billion kilometres away and when we only had one third of Pluto’s orbit mapped.
Five spacecraft have now achieved escape velocity using these methods we have spoken about and are now the farthest objects created by man. Pioneer 10, 11, Voyagers 1 & 2 & New Horizons. It’s incredible to think that all of this was done based on theories that were developed hundreds of years ago by observation only and the desire to figure out how the heavens worked long before we even thought it was possible to get into space let alone use gravity as our main engines.
Also Read:- Venus Spins Backwards, But Why?