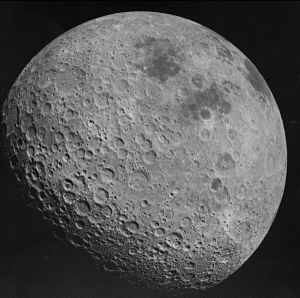 The moon is our planet’s constant, dependable companion. Whether it’s waxing, waning, or shining in its full glory, it always presents the same face to Earth: a mottled, monochrome landscape of black and white rocks.
Depending on where you are in the world, you might see different things in that great inkblot in the sky. Some see the smiling face of the ‘Man in the Moon’. Others might see a rabbit stirring a pot of medicine. But whatever you make of it, that pattern is always the same. That’s because the moon is tidally locked to the Earth: gravitational forces between the two have slowed the moon’s spin, so it takes exactly the same amount of time to complete a full rotation as it does to orbit the Earth.
That’s given us plenty of time to examine this side facing us, but nobody knew what was on the far side until relatively recently. Turns out it’s very different from the side we normally see. And astronomers are still working to pin down how that happened.
The mysterious, unseen side of the moon is sometimes called the dark side, thanks, Pink Floyd, but it is not always dark. During a new moon and when all we can see from Earth are those toenail crescent slivers, the sun is positioned behind the moon, lighting up the far side and leaving the side facing us dark instead. But it is dark from a knowledge point of view.
Because of that rigid tidal locking, we will never be able to see the far side from the surface of the Earth. To do that, you have to physically fling something around the back of it. Fortunately, 60 years ago, flinging things around the moon was an integral part of the space race. Although the US was the first to put an actual person on the moon, it was the Russians who led the space race at the beginning and in 1959, their Luna 3 spacecraft became the first to visit and take pictures of the far side. 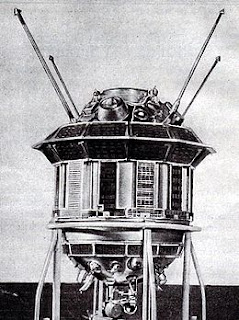 But you couldn’t just snap a digital photo back then. When Luna’s cameras detected the sunlit far side of the moon, they took photos using actual physical film. The negatives were then developed within the spacecraft and passed to a scanner, which shone a light through the image in 1000 horizontal lines and transmitted it back to Earth as an analogue signal, like fax.
The image was blurry and low-res, which is n0t too surprising if you remember what faxes used to be like. But it was our first glimpse of a totally unknown lunar surface and it was immediately obvious that the far side was completely different from the side we’re used to seeing. Where the near side is covered in dark patches, the far side was much brighter, with just two small black spots. 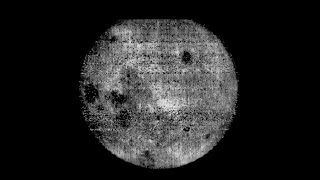 Since then, many more spacecraft have flung themselves around the moon to get a better look at its “dark side,” and collected all kinds of data, from high-resolution images to altitude and density readings. And with all that data, scientists can now clearly see the differences between the near and far sides in incredible detail.
As that blurry Luna 3 image suggested, while the near side is covered with vast plains of dark lava, the far side has very few. Instead, it’s a rugged cratered highland landscape of a type of light-coloured rock that’s rich in calcium.
Elevation maps also reveal something that’s not easy to see from the pictures: one of the largest craters in the solar system. The South Pole-Aitken crater covers a huge area of the southern hemisphere on the far side, around 2500 kilometres in diameter and 13 kilometres deep.
Even more surprisingly, measurements of the density of rocks beneath the lunar surface showed that the moon’s crust is up to 35 kilometres thicker on the far side, compared to the side that faces us. That was surprising, to say the least. With the Earth and other rotating planets as examples, we had reason to think that you would get the same kinds of features on all sides of a planetary body. But it turns out that’s not always a thing!
Today, with detailed images of planets and moons all over the solar system, we know that the idea of a two-faced world is not unique. Mars has radically different northern and southern hemispheres, Pluto is adorned with a huge, heart-shaped birthmark over one side and Iapetus, a moon of Saturn is truly two-toned, with dark-coloured dust smeared over one hemisphere of its icy white surface. And yet, the reasons for the differences between the near and far sides of the moon remain something of a mystery.
It’s hard to reconstruct a 4.5 billion year history, even of our closest neighbour. But like most mysteries, scientists have some ideas! The difference in the number of lava plains, for instance, is probably tied to that uneven crust. Some researchers think that in the early days of the solar system, while the Earth and Moon were still forming, a massive asteroid struck the thick crust on the far side, creating that gigantic South Pole-Aitken crater.
Later impacts all over the moon left craters on the far side, but were able to pierce the thinner crust on the near side, unleashing a flood of lava that filled the craters they left behind. The lava cooled and the Earth-facing side of the moon was left with a permanent scar, its mottled face.
But that doesn’t explain why the crust was thicker on one side in the first place or why the South Pole impact didn’t send the moon shooting off into space. With government agencies and private companies starting to set their sights on the moon again, hopefully, we will get more data that will help us figure that out.
Luna 3’s photos of the far side of the moon were probably the first major lunar revelation of the space age. But nearly 60 years later, we still have a lot more secrets to uncover.