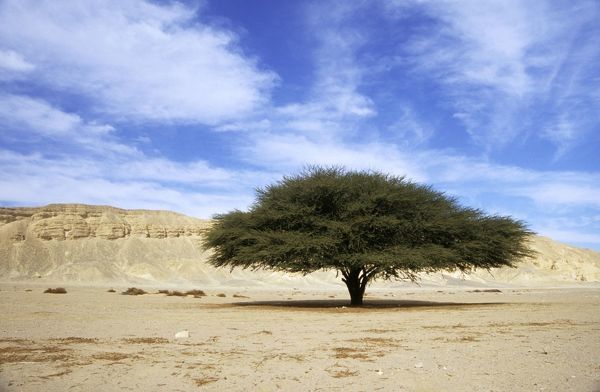 Humans can get by in the most basic of shelters, can scratch together a meal from the most humble of ingredients. But we can’t survive without clean water. And in places where water is scarce—the world’s deserts, for example—getting water to people requires feats of engineering and irrigation that can be cumbersome and expensive. A pair of new studies from researchers at The Ohio State University offers a possible solution, inspired by nature.
“We thought: ‘How can we gather water from the ambient air around us?'” said Bharat Bhushan, Ohio Eminent Scholar and Howard D. Winbigler Professor of mechanical engineering at Ohio State. “And so, we looked to the things in nature that already do that: the cactus, the beetle, desert grasses.”
Their findings were published Dec. 24 in the journal Philosophical Transactions of the Royal Society. The works were co-authored with Ohio State Ph.D. student Dev Gurera and with Ohio State engineering researcher Dong Song.
Bhushan’s work focuses on finding nature-inspired solutions to societal problems. In this case, his research team looked to the desert to find life that survives despite limited access to water.
The cactus, beetle and desert grasses all collect water condensed from night time fog, gathering droplets from the air and filtering them to roots or reservoirs, providing enough hydration to survive.
The cactus, beetle and desert grasses all collect water condensed from nighttime fog, gathering droplets from the air and filtering them to roots or reservoirs, providing enough hydration to survive.
Bhushan’s team studied each of these living things and realized they could build a similar—albeit larger—system to allow humans to pull water from nighttime fog or condensation.
They started studying the ways by which different surfaces might collect water, and which surfaces might be the most efficient. Using 3-D printers, they built surfaces with bumps and barbs, then created enclosed, foggy environments using a commercial humidifier to see which system gathered the most water.
They learned that conical shapes gather more water than do cylindrical shapes—”which made sense, given what we know about the cactus,” Bhushan said. The reason that happens, he said, is because of a physics phenomenon called the Laplace pressure gradient. Water gathers at the tip of the cone, then flows down the cone’s slope to the bottom, where a reservoir is waiting.
Grooved surfaces moved water more quickly than ungrooved surfaces—”which seems obvious in retrospect, because of what we know about grass,” Bhushan said. In the research team’s experiments, grooved surfaces gathered about twice as much water as ungrooved surfaces.
The materials the cones were made out of mattered, too. Hydrophobic surfaces—those that allowed water to bead up rather than absorbing it—gathered the most water.
“The beetle’s surface material is heterogeneous, with hydrophilic spots surrounded by hydrophobic regions, which allows water to flow more easily to the beetle’s mouth,” Bhushan explained.
The research team also experimented on a structure that included multiple cones, and learned that more water accumulated when water droplets could coalesce between cones that were one or two millimeters apart. The team is continuing those experiments, Bhushan said.
The work so far has been done on a laboratory-only level, but Bhushan envisions the work scaled up, with structures in the desert that could gather water from fog or condensation. That water, he thinks, could supplement water from public systems or wells, either on a house-by-house basis, or on a community-wide basis.
There is precedent for the idea: In areas around the world, including the Atacama Desert in Chile, large nets capture water from fog and collect it in reservoirs for farmers and others to use. Those nets might not be the most efficient way of harnessing water from the air, Bhushan believes.
“Water supply is a critically important issue, especially for people of the most arid parts of the world,” Bhushan said. “By using bio-inspired technologies, we can help address the challenge of providing clean water to people around the globe, in as efficient a way as possible.”
Source: Philosophical Transactions of the Royal Society A: Mathematical, Physical and Engineering Sciences
Also Read:- Human ESC-Derived Chimeric Mouse Models of Huntington’s Disease Reveal Cell-Intrinsic Defects in Glial Progenitor Cell Differentiation