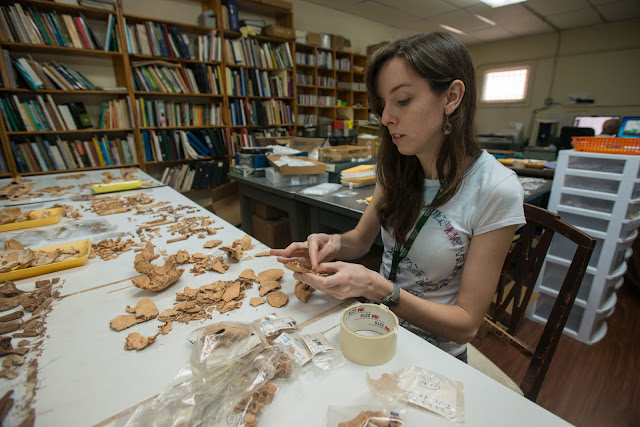 While examining a skull from an ancient burial ground in a pre-Columbian village in Panama, Nicole Smith-Guzmán, bioarchaeologist at the Smithsonian Tropical Research Institute (STRI), was surprised to discover an example of surfers’ ear: a small, bony bump in the ear canal common among surfers, kayakers and free divers in cold climates. After inspecting more skulls, she concluded that a select group of male divers—perhaps looking for pearls and oyster shells coveted for jewellery making, may have lived along Panama’s Pacific coast long ago.
“Bone is a dynamic tissue that responds to external stimuli, so changes in bone structure provide great clues about where and how a person lived and died,” Smith-Guzmán said. “When I looked at an additional 125 skulls from nine burial sites across Panama, I found seven cases of surfers’ ear in males and one in a female skull, all from sites near the Gulf of Panama.”
No one really understands exactly how the bony growths, technically called exostoses, form. But the skin is thin in the ear canal and the accepted theory is that cold water or cold temperatures caused by wind and water make the bone react by growing extra layers, similar to the way bone spurs form on the feet and in other places where there is constant irritation or stress. Almost half of the members of a swimming club in England had surfer’s ear according to a report cited in the study.
Unlike most tropical countries where seawater is warm, the water temperature in the Gulf of Panama plummets between January and April when strong trade winds from the north force warm surface water out into the Pacific and colder, deep water rises to the surface to replace it. This deep, nutrient-rich water feeds tiny sea organisms, which in turn are eaten by fish and whales. The Gulf becomes an extraordinarily productive fishing ground supporting a thriving fishing industry and attracting dolphins, sharks and other top-of-the-food-chain animals.
Years ago, when co-author Richard Cooke, zooarchaeologist at STRI, unearthed a male skeleton with surfer’s ear in Sitio Sierra, near Aguadulce in Panama, he was a STRI post-doctoral student with only rudimentary knowledge of physical anthropology. But he collected all of the human remains he found, enabling Nicole-Smith Guzmán to reexamine them 43 years later.
Cooke spent much of his career studying ancient fishing practices. He found that Panama’s pre-Columbian peoples fished from boats all along both the Pacific and Caribbean coasts of Panama. If fishing alone put people at higher risk for surfer’s ear, then more cases of the bony growth would be present at all of the sites, but all of the examples came from areas near the Gulf.
“We think it more likely that diving in the cold waters of the Gulf caused these cases of surfer’s ear,” Smith-Guzmán said. “Silvery mother-of-pearl ornaments, and orange and purple ones from two large ‘thorny’ oysters in the Spondylus genus were common in burials and comprised an important trade item in the region. Some of these shells wash up on beaches, but by the time Vasco Nuñez de Balboa and other Spanish explorers arrived, their chronicles tell us that expert divers were trained from childhood to dive down to four fathoms to retrieve pearl oysters of desirable large size.”
The Spanish encouraged this industry and for many years, Panama was known for its pirates and pearls, including La Peregrina, the largest pearl known at the time it was found.
The team also ruled out fungal or bacterial ear infections common in the tropics that sometimes cause bone deformations: most of the skulls affected were from males, and infections should occur in both male and females at about the same rate. From the evidence they have so far, it looks like mostly males were involved in whatever activity caused surfer’s ear in Panama. In another study, archaeologists in the Canary Islands found roughly equal numbers of cases of surfer’s ear in ancient male and female skulls, suggesting that aquatic activities there were not restricted to one gender.
“I spoke to one ear, nose and throat specialist in Panama and she has never seen a case of surfer’s ear here, but we want to do a follow-up study in which we look at skulls from a much wider area and also do a survey of doctors in Panama to find out if surfers or divers ever show up with surfer’s ear these days,” Smith-Guzmán said.
Surfer’s ear is an intriguing subject that archaeologists, anthropologists and medical doctors have explored for more than a century. Although the exact causes of this phenomenon are still debated, these bony growths offer important clues into the cultural activities, gendered division of labour and environmental conditions in the past.
Source: American Journal of Physical Anthropology
Also Read:- Anomalous Bodily Maps of Emotions in Schizophrenia