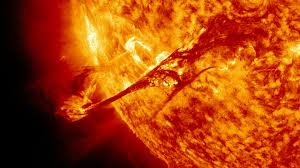 Back in September 1859, a massive solar storm called the Carrington Event triggered a coronal mass ejection, which produced dazzling auroras in Earth’s atmosphere those were visible around the world. The atmospheric light show was so brilliant it reportedly woke gold miners in the Rocky Mountains. The electric surge caused by the solar storm disrupted telegraph systems in Europe and the United States and even shocked some operators. Despite advances in communication technology and other infrastructure design, a Carrington-scale event could still be devastating.

One of the central questions concerning today’s solar scientists is how to predict when a threatening solar storm might erupt. What’s known is the sun’s activity peaks and diminishes over an 11-year solar cycle. During periods of maximum activity, which last occurred in 2014, the sun emits solar flares more frequently. But scientists continue to struggle with when — precisely — those blasts of solar plasma will happen. Better knowledge of solar activity could provide engineers back on Earth time to prepare for a wave of solar energy slamming into Earth’s atmosphere.
A new study, however, offers some hope. A trio of UK and American scientists analyzed the last five solar cycles, which stretched back to the 1960s, and found a pattern during each solar maximum.

They looked a satellite date of the sun’s outer atmosphere, also known as its corona, the constant stream of particles emanating from the sun, and the auroras that occur when the sun’s particles hit Earth’s magnetic field.
“For each physical variable we find that the distribution tail (the exceedances above a threshold) can be rescaled onto a single master distribution using the mean and variance specific to each solar maximum interval,” the researchers wrote in an article published in July in the journal Space Weather.

In other words, by evaluating decades worth of information about the sun’s activity, the scientists have generated an improved predictive tool for Earth-based engineers trying to protect infrastructure from the next blast of solar energy.
Principal author Sandra Chapman, a Fulbright Scholar and astrophysicist at the University of Warwick in the United Kingdom, said: “If the system continues to behave in the same way, which we can never know for sure, this mathematical expression should hold for the next solar maximum.”

While the Chapman team’s research won’t predict the next extreme, Carrington-scale event, it does provide insights into large events that might also threaten infrastructure on Earth. Predicting the sun’s solar activity is likely to soon get another boost. NASA’s Parker Solar Probe lifted off on August 11 from Cape Canaveral Air Force Station in Florida. It will orbit as close as four million miles to the sun. That’s about eight times closer than the planet Mercury. The probe’s close proximity will allow it to analyze “gusts” of particles emitted by the sun that travel to Earth, Chapman said.