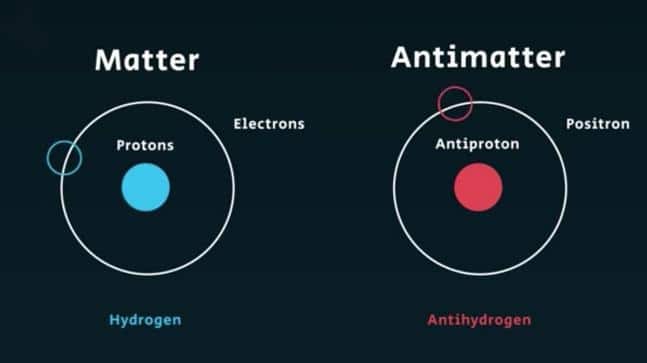 The whole Universe is made of matter. Everything is made up of matter, you, me, smartphones, PC, Pizza, Puppies, Black-Holes everything you can possibly think of. But there is also this thing called antimatter. Around the turn of the last century, Einstein was working on the theory of relativity and other physicists were trying to figure out how the tiniest parts of the universe worked called Quantum Theory. This was all done with mathematics lots of lots of math.

At one point a physicist named Paul Dirac realized X2 = 4 has two answers. 22=4 &-22=4  so Answers are 2 and -2, this means if a matter is the positive two, there must be some kind of opposite to fit the negative two – 2. Physicists called this opposite antimatter.

The reason you don’t see antimatter around is that at the beginning of the universe matter and anti-matter pop into each other and disappear in a burst of energy. But somehow matter lived through that annihilation. you probably know that all matter is made of protons and electron. Well, the antimatter is made up of antiprotons and positrons. A proton is a positive heavy particle and an antiproton is a negative heavy particle.  Like that Electrons are light and negative where positrons are light and positive. Because of their oppositeness when they touch BOOM energy burst.

But there are scientists who are making antimatter to find out more about it. ALPHA Collaboration group at CERN create antimatter using the particles beams at CERN we convert protons into antiprotons.

CERN is the Center For European Nuclear Research, It’s where the Large Hadron Collider lives. This Antimatter Factory takes protons shooting along the LHS and converts them to antihydrogen, the antimatter version of hydrogen. Then Dr Bertsche and his team trap the antihydrogen to study it.

We know a lot about hydrogen, so we wanna see how antihydrogen might be different. But remember, you can’t let antimatter touch matter, ever. No air, no fancy containers nothing that’s made of matter. So, the scientists use magnetic fields to hold the antihydrogen inside this trap. They behave like little tiny refrigerator magnets, it looks like a bathtub. but to do so the magnetic field has to arrange. The antihydrogen atoms basically sit in a magnetic bathtub or magnetic bottle. But it’s really actually physically shaped like a bathtub and it’s about the size of sort of a two-litre coke bottle.

Disappointingly antimatter is not any kind of miracle form of antimatter it does not have antigravity property. It does not do anything different at all.  If you could build an antimatter table, it would just be a table. That’s weird, right?

What if in those few hot moments after the Big Bang the universe was completely made of antimatter? Would it feel exactly the same to us? I mean think about it if antimatter and matter are exactly the same Then what is the difference? If the whole universe was made of antimatter we do call that matter and what we think of as matter would be called antimatter. All the things we call positive are just relative to our experience. Physics get really weird when you get right down to it.

In the end, an antimatter universe based on everything we know would look and feel exactly the same as our own. But more research is needed. Scientists trapped antimatter for the first time in 2010. Now just a few short years later they have learnt to trap more than a dozen antiatoms at a time over and over again. But still, after a bit they have to let the antimatter go then it annihilates and disappears. But even though annihilation sounds like a big, violent, terrible, thing it’s actually kind of like a nothing. The scientists see some gamma radiation and that’s all it shows.

Practically speaking CERN has only made 10 nanograms of antimatter. All the energy from annihilating it could only power one light bulb for 4 hours and to make that antimatter takes a billion times more energy than what we get back from annihilating it. There’s not a lot of practical application for this antimatter research yet, but antimatter is actually commonly used in a lot of medical techniques such as a Positron Emission Tomography AKA PET scan, it’s used for cancer diagnoses.

There are lots of potential application of it. But based on what we know of antihydrogen whether we could do that in future is a big old shrug. At the moment, almost a century after it was first theorized, antimatter research is still in its infancy, but with more research someday we will know more.