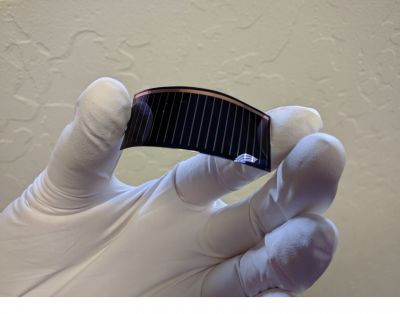 Two news items about Sunnyvale, California-based Alta Devices drew attention recently. Alta Devices, first of all, has set a solar efficiency record for its single junction solar cell. Actually, this is the seventh time the company achieved such a distinction. As optics.org said, this was “the latest in a long series of cell or module records set by the Californian company.”
These cells were certified by Fraunhofer ISE CalLab, a solar energy testing laboratory. In November, Alta Devices provided its single junction gallium arsenide solar cells to the lab. They were certified as being 29.1% efficient. The 29.1 figure beats a previous best by Alta of 28.9%.
As you can see from the numbers, however, the increases are not startling. As optics.org commented, “the cell efficiency has improved only incrementally over the past few years.” The optics.org article added that “the record-setting cell is small in scale and not sufficiently developed for commercial use.”
At the same time, the team behind the solar cells are achieving improvements and NASA is paying attention. The second reason Alta gained headlines this month: NASA is testing the Alta Devices technology at the International Space Station.
NASA will be evaluating it for low-Earth orbit missions, and that includes CubeSats, a class of research spacecrafts.
Specifically, the purpose of the test, said the company, is “to evaluate new solar cell and package technologies in support of future NASA missions requiring solar cells with high efficiency, high packing density, and very low mass.”
So, these candidate cells are to gain exposure to the space environment. Alta Devices CEO, Jian Ding, seized the opportunity to praise the company’s solar cell advantage.
“NASA’s interest in Alta’s record-setting performance demonstrates that our technology withstands some of the most challenging environments endured by autonomous systems in space, high altitude, and on land.”
An array of nine cells was delivered to NASA earlier this year. The experiment was transported to the ISS by the NG-10 Antares rocket in November. “The solar cells will be installed into a zenith-facing position on the station in the coming weeks,” said the company.
The company positioned its gallium arsenide solar technology as well suited to powering products requiring autonomous power—small satellites, unmanned aerial vehicles (UAVs) and autonomous vehicles. “Gallium arsenide has several unique characteristics; high efficiency, excellent UV and radiation resistance, flexibility, and low weight. Alta chose to focus on gallium arsenide because of its intrinsic efficiency advantages, as well as its ability to generate electricity at high temperatures and in low light,” said the company.
“Continuous advances in power-to-weight ratio are critical for tomorrow’s small satellites, autonomous UAVs (unmanned aerial vehicles), electric vehicles, and autonomous sensors.”
After a year of exposure, the cells will be returned for evaluation to NASA and Alta Devices. There is another talking point about their use of GaAs—typically, it is expensive to produce. Alta invented a manufacturing technique that develops extremely thin layers of GaAs (a fraction of the thickness of other GaAs solar cells).
Thin polymeric films were developed as cover slide materials for the solar cells. These “are exposed as separate samples, to measure atomic oxygen erosion yield and transmission changes due to ultraviolet radiation,” said the company.
John Fitzgerald Weaver, meanwhile, offered a perspective on record-setting back in February. Writing in Electrek, he said that as far as assessing cell efficiencies, “much like the sport of professional boxing, there are many ‘record solar cell efficiencies’ because there are many product types [many different product types and their respective efficiencies].”
Fast-forward to December and John Fitzgerald Weaver has a key point to make, this time, in pv magazine: setting a new single junction solar cell efficiency record of 29.1 percent was an efficiency story but the big deal was not the efficiency, it was the weight, which fell 30 percent. Weaver said, “and from the words of Alta Devices, its process has lowered material costs to ‘essentially nothing’.”
This is what the company said: “Alta’s cells are about one micron thick; for comparison, a human hair is approximately 40 microns thick. By utilizing a very thin layer of material with the highest energy density possible, the amount of material needed is low. Therefore potential system costs can be dramatically reduced.”
Weaver commented that “there’s reason to think that the future holds a place for Alta Devices and other higher efficiency technologies.”
Source: Alta Devices
Also Read:-  Impact Of Pear-Shaped Fission Fragments On Mass-Asymmetric Fission In Actinides