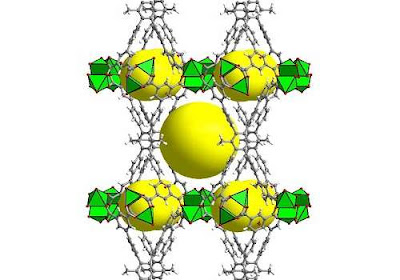 A research team at King Abdullah University of Science and Technology (KAUST), Saudi Arabia, with collaborators at the University of Crete, Greece has created a cheaper and more effective way to store methane. They achieved it by tweaking the structure of metal-organic frameworks eventually creating a Hybrid Material.

Natural gas, which is almost 95 percent methane, is a good candidate for replacing gasoline and coal. It can provide the same amount of energy as these fossil fuels while releasing much less of the greenhouse gas carbon dioxide and the toxic pollutants carbon monoxide, nitrogen oxides and sulfur oxides. Methane is more environmentally friendly in several ways, but its widespread adoption for powering vehicles and other local and mobile applications is limited by shortcomings of existing storage and transport technologies.

“MOFs are considered by far the best class of materials for storing gases, especially methane,” says Eddaoudi. He explains that tinkering with different pore sizes can create exceptionally large internal surface areas that allow MOFs to hold greater amounts of gas than other porous substances. MOF-making can be likened to using toy building blocks to assemble a wide range of open geometric networks. Diagrams representing these structures actually look like colourful toys (see image) but built at the atomic and molecular scale. The key to the latest MOF is the choice of the appropriate organic ‘pillars’ (shown in grey in the image) used to create two types of cavities that can each contain many of the methane molecules taken up by the MOF.

Further tweaking is required. “We need to boost the methane storage capacity and cyclability of the MOFs, enhance their stability in water, and explore scaling up to commercially useful quantities,” says Eddaoudi. He is confident that the properties of the MOFs can be optimized because of the unique flexibility allowed by the linker and metal structure. Eddaoudi predicts that commercially produced MOFs will be efficiently and effectively storing and transporting methane inside the next decade. Such a development could herald real progress in weaning society off its dependence on oil and coal.